Edinburgh 2014: ‘Journey to the West’ review 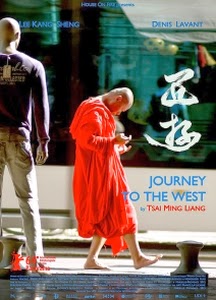 In Don DeLillo’s Cosmopolis, the dutiful limo driver of billionaire asset manager Eric Packer coldly describes how the traffic before them “speaks in quarter inches”. The same could be said of the stars of French-Taiwanese collaboration Journey to the West (Xi You, 2014), the experimental new film from Stray Dogs director Tsai Ming-liang, featuring Denis Lavant and Lee Kang-sheng as a Buddhist monk. A pristinely shot, provocative meditation on humankind’s rapidly quickening tempo of life, Journey to the West’s central conceit was perfectly illustrated by the walkouts of those viewers too impatient to ‘waste’ 56 minutes of their time at its Berlinale unveiling earlier this year.

We begin with an extended locked-off shot staring deep into the eyes of an horizontal Lavant (Beau Travail, Holy Motors), gently inhaling and exhaling as he gazes glassily into the distance. The focus of his attention – if there is indeed one – is intentionally kept from the audience, but his general demeanour is one akin to an exhausted traveller. This contemplative approach continues throughout the entirety of Journey to the West, as we jump between Lavant and Lee’s slow walking monk, who glacially traverses the French city of Marseille. Locations range from a luxurious drop-off pool to the exterior of one of the Noailles district’s many Algerian cafes (pictured), with each distinct setting immaculately framed by both the patiently observant Tsai and the surrounding hustle and bustle of city life.

Though we’re initially in complete and utter awe of Lee’s mantis-like movement – partially scaling a flight of stone stairs at what seems like a snail’s pace – as the ‘action’ transfers itself to the busy streets of Marseille we begin to see his cinematic role evolving. In a comparable way to the titular orang-utan of French documentarian Nicolas Philibert’s Nénette (2010), the actor-monk has a mirroring effect on those swarming around him. Reactions to his bizarre method of motion range from bemusement to wonder, with wide-eyed young children tugging the arms of accompanying adults for acknowledgement, reassurance or perhaps even a subtle blend of the two.

Taking its both title and primary influence from Ming Dynasty scribe Wu Cheng’en’s 16th century novel, Journey to the West triumphantly succeeds in intertwining the themes that surround mass immigration and globalisation with offbeat moments of visual humour. Like an arthouse version of the popular children’s book series Where’s Wally, Lee’s red-robed figure often enters the frame from the most unexpected of angles, only drawing the eye’s attention after several minutes of pleasurable reconnaissance. UK audiences may still be waiting for Tsai’s Stray Dogs to make the journey West – here’s hoping its unique follow-up will also be in tow.