In 1986, Georgiy Daneliya made Kin-dza-dza, a highly celebrated science fiction satire of the Soviet Union. A live-action, steam punk-infused parable that reflected the altering political landscape, Daneliya’s tale of an ethnically discriminative alien world highlighted the growing discourse between the USSR and Chechnya. Now, Daneliya has revived his sardonic satire of the Soviet state as an animated feature – now titled Koo! Kin-dza-dza – that transfers the same sociopolitical anxieties into Putin’s Russia. We begin with Renowned Cellist Vladimir Chizhov and his wayward teenage nephew Tolik encounter a barefooted, pyjama sporting Martian in the middle of a snowy Moscow street.

Neither of them would have expected that this chance meeting would lead to an unreal adventure on the other side of the universe. They accidentally dial the incorrect number on his handheld teleportation device and find themselves transported to the planet Plyuk, a post-apocalyptic world where the natives speak only a handful of words (with everything else simply referred to as ‘Koo’). It’s a world where people fall into two categories, either, ‘Patsaks’ or ‘Chatlanians’ and where the hierarchy is determined by the colour of trousers you wear. Alone in a foreign world, full of ethnic inequality and social oppression, Vladimir and Tolik have to pull together if they’re to escape and find their way home. 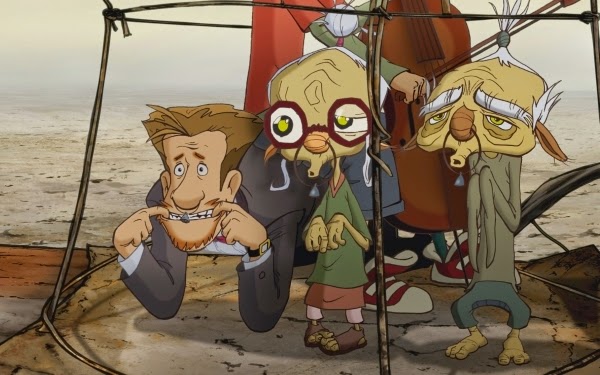 A surreal depiction of life in the farthest reaches of the galaxy, Koo! Kin-dza-dza’s unique concept is realised through traditional animation techniques that beautifully present the darkest, most repugnant aspects of humanity against the barren vistas of an arid alien world. Incorporating additional elements from the genres of fantasy and westerns, Daneliya constructs a bleak biosphere of anachronistic technology and retro-futuristic inventions that’s reminiscent of the austere industrial landscapes of eighties sci-fi. The planet’s scorched desert terrain is a cheerless canvas for the soft pastel shades of Daneliya’s artwork to come to life, yet the film’s pale, inert colour scheme perfectly mirrors the callousness of mankind and the indifference felt by a generation tired of caring.

A cataclysmic world flavoured with a touch of caustic humour, the escalating absurdity of Daneliya’s self-engineered reboot relies upon language and humour as the key ingredient to this exploration of the growing homogenisation of culture in a petrifying world of intensifying nationalism. By recycling the same self-reflective narrative almost 30 years later, Daneliya has shown just how little the world has developed. Although the film preserves much of the original’s piercing social commentary, the humour and visuals of Koo! Kin-dza-dza have been diluted, culminating in a notable absence of terror and suspense. Clearly targeted towards a younger audience, the film struggles to balance the complexities of its compounded world with the breezy visuals imparted by the animation.

Caught in an indeterminate state between form and function, this is half-quirky children’s adventure, half-intelligent satire and it’s hard to define just who the film’s target audience is. However, such an earnest and insightful approach to animation shouldn’t be discouraged and behind Koo! Kin-dza-dza’s complex world of nasal bell-toting aliens, robotic cello players and plastic porridge, there’s a charming and incredibly intriguing examination of national identity and the role of art in a society undergoing a full cultural collapse.