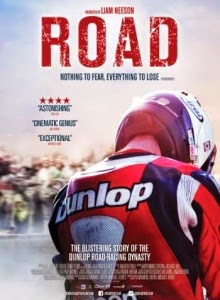 With the nation’s attention fixed on Rio and the 2014 World Cup, passions are running high. And yet, despite the lavish excesses and camaraderie that comes with such an illustrious event, football is still seen by many as a “weaker” sport. Up against rugby, for example, some would say footballers are akin to the ‘London Silly Nannies’ from Seth McFarlane’s Family Guy. Put them up against the daredevils that grace motorcycle road-racers? No contest. When watching the potentially deadly motorsport on television, and indeed in Michael Hewitt and Dermot Lavery’s Road (2014), the thrills and spills are electric: the sound of a bike tearing past us as they race to catch their opponents to the finish line.

Crucially, what makes the sport even more despairingly strange to watch, is the peril that runs alongside it. In Northern Island, it was the world famous Dunlop brothers Joey and Robert (and later Robert’s sons Michael and William) who had brought bike racing to an all-time high throughout the country, spreading like wildfire. Road chronicles the Dunlop’s life as riders: their joys and disappointments, showing both the dizzying highs and the crashing lows of their journeys. One such moment, as Robert continues relentless quest to get back in the saddle, shows both the splendour and despair of the sport. As he finds the courage for another wrestling match with death, a small brush with another driver sends his spiralling to the hard tarmac. Robert was back and winning a fortnight later.

Pure stupidity, some would say, but such is the bravery and tenacity of these men that is makes for a hugely compelling watch. Filmed with incredible depth and zip by filmmakers Hewitt and Lavery, Road is an earnest, realistic acknowledgement of the sport, showing the impacts of the brothers’ love for the sport. It’s hardly a new approach, using on-bike cameras to capture the speed and danger that comes from being on those bikes, but as engines rev as if right next to our ears, we can’t help but be transfixed. Narrated with a cool calmness by Liam Neeson – who, quite frankly, could narrate anything and draw you in completely – this is an honest that balances excitement with the raw emotion of its history. While it isn’t quite on a par with some of sports greatest efforts (such as TT: Closer to the Edge), Road is still a compelling watch and a fitting tribute to the sport and its passionate followers.