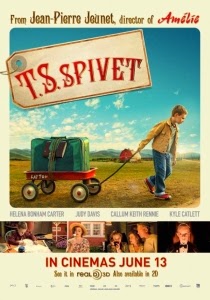 French director Jean-Pierre Jeunet has demonstrated a deft ability for creating fantastical worlds, as previously seen in Delicatessen (1991), The City of Lost Children (1995) and his big crossover hit, Amélie (2001). All of these showed a gift for aesthetically-pleasing oddities, and his new work, The Young and Prodigious T.S. Spivet (2013), is no exception. It’s also his second American feature, his last being the poorly-received Alien Resurrection (1997). It seems the source material, a beautifully illustrated tome by Reif Larsen about a cartography-obsessed boy genius, is a perfect fit, redeeming him of past sins and creating a plush, modern fairytale with strains of Mark Twain’s Huckleberry Finn.

The story opens in the golden cornfields of Montana, at the farmstead of the Spivet family and home to our hero, Tecumseh Sparrow Spivet (newcomer Kyle Catlett). Here he lives with his twin brother, Layton (Jakob Davies), his older sister, Gracie (Niamh Wilson), his scatter-brained mother (Helena Bonham Carter) and his Stetson-sporting father (Callum Keith Rennie), who looks like he’s fallen off a Marlboro billboard. Tragedy strikes the family when Layton dies in an accident, an event that the Spivets refuse to discuss. This leaves a guilt-ridden T.S. able to get up to his own devices, eventually designing a perpetual motion machine. After the Smithsonian Institute offer to house his contraption, Spivet decides to make the long trek across the country alone to pick up an award for his incredible feat.

Jeunet T.S. Spivet is a fantastical fairytale which swims in the romanticism of childhood and the decay of the American Dream. As with his previous films, Jeunet makes sure to allow the shadows to creep in, adding a darker edge where possible. With the tragic death of his brother, Spivet markedly demonstrates that it’s not pitched for children – despite appearances – and is more of a cautionary tale for adults about how to communicate (or, as is the case here, how not to communicate) with children. The transition from wide-open plains, through rusting old train yards, to the grandeur of the Smithsonian Institute afford Jeunet the opportunity to indulge in his love of Americana, portraying a version of the country that is out of time, loaded with memorabilia and iconography of both the Old West and the 1950s. T.S. Spivet may not convert Jeunet’s dissenters, but for those who have admired the auteur’s past oeuvre, this is another sumptuous curio.