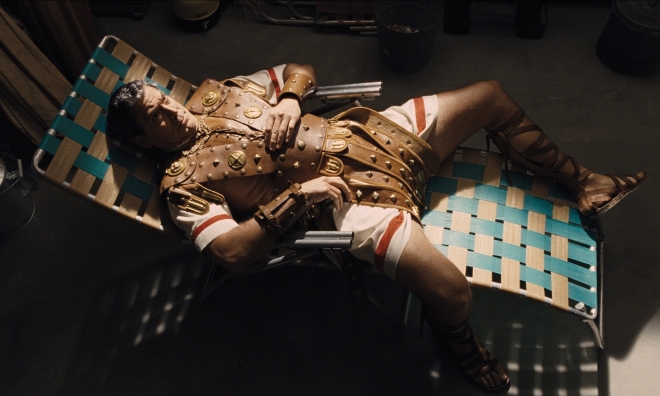 ‘Second time’s a charm’ is not the feeling that hits home when reflecting upon the Coen brothers’ Hail, Caesar!, the opening film of this year’s Berlinale. Second as this is their second time opening the festival (after True Grit did the honours in 2011 before scooping a number of Oscars) and more importantly sees them reentering an homage, pastiche and/or parody of the 1950s Hollywood Golden Age. This latest offering focuses on Eddie Mannix (Josh Brolin) and is partly based on the real MGM studio fixer of the same name on an average day spent dealing with kidnapped stars, pregnant starlets and the like.

The ‘like’ includes the casting of unsuitable cowboy Hobie Doyle (Alden Ehrenreich) in a prestige picture directed by Laurence Laurentz (Ralph Fiennes, again showing his superior comedy chops). The central premise these denizens saunter through is the kidnapping of major Hollywood star Baird Whitlock (a dazed and confused George Clooney) by a group of screenwriting Communists who are preventing his latest epic (the titular Hail, Caesar!) from finishing. The film itself is by parts delightful, witty and charming in the cynical, post-modern, scattergun nature of everything is worthless; “We’ll poke fun at everything because we can”. There’s a great deal to admire, particularly Channing Tatum’s Gene Kelly-like dance sequence and the sudden appearance of Tilda Swinton as identical twin gossip columnists.

Sadly, when there is a reach for an actuality of emotional truth we’re left with little more than a latent simulacrum that seems reaching but fails to grasp ‘real world’ situations and how those affect individuals. Like another golden boy of the same institutions, Quentin Tarantino, the Coens are here peddling their greatest hits for ever-diminishing returns. Hail, Caesar’s composite elements don’t really add up to that much, despite the Coens’ attempts at a rousing finale that falls flat and leaves us questioning “Is that it?”. To take heed from The Sex Pistols, audiences will likely be left pondering: “Ever get the feeling you’re being cheated?” Already compared by some to A Serious Man, think more Intolerable Cruelty.