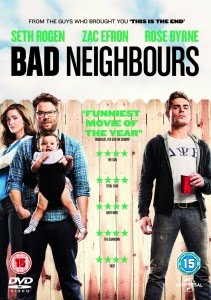 Nicholas Stoller’s 2014 US comedy Bad Neighbours is a tired and contrived effort which once again posits Rogen as an adult fighting with his adolescent urges (a character trait which first emerged seven years back with Knocked Up) in a routine which is really beginning to grow stale. Mac (Seth Rogen) and Kelly (Rose Byrne) are a reasonably balance young couple enjoying the early stages of parenthood. Their suburban bliss is shattered one day by the unexpected arrival of a rowdy hard-partying college fraternity next door. The house leaders, Teddy (Zac Efron, replete with severely ripped, cartoon-like torso) and Pete (Dave Franco) are a popular campus duo intent on turning every night into a drug-fuelled riot.

Teddy and Pete’s neighbours, not wanting to appear like a repressed and uncool older couple, attempt to befriend the students in order to maintain the status quo. It isn’t long, however, before both sides fail to keep to their promises and thus begins a series of petty revenge attacks and well-orchestrated pranks. Given the fairly simplistic set-up, there was certainly the potential in Stoller’s Bad Neighbours for plenty of fun, outrageous set-pieces. While a couple of incidents manage to hit the comedic sweet spot, it’s a film which is a good rewrite or two away from working. The creative team seem to think ad-libbing will smooth over the narrative cracks, but both Rogen and Byrne confuse playing it large and over the top with actually being funny, and their constant improvised bickering is of the groanworthy variety.

Bad Neighbours has a very sitcom-like, throwaway feel to it and even the customary pop culture nods are awkwardly shoe-horned in, particularly a Robert De Niro theme party which seems to think that having the student masses yelling out his famous lines is instantly uproarious. It isn’t. There’s a vague attempt at forging a duel plotline between Efron and Franco as tensions arise when study gets in the way, but this is as flat and underdeveloped in the main couple’s plight. While protagonist Rogen and regular collaborator Evan Goldberg are credited as producers, their imprint is all over the script (how many more slo-mo hip hop montages do we have to endure?), and as Bad Neighbours lurches from one unremarkable gag to the next, it’s clear their brand of humour is in need of a recharge.

You could win a Blu-ray copy of Bad Neighbours with our latest competition. Simply follow this link to enter.