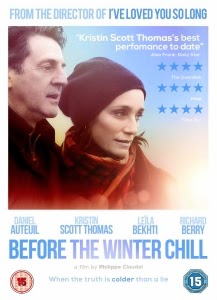 French director Philippe Claudel’s noirish new thriller Before the Winter Chill (2013), starring Kristin Scott Thomas and Daniel Auteuil, follows the fortunes of middle-aged couple who find their marriage threatened by a troubled young woman. Paul (Auteuil) is a successful surgeon, popular with the staff at his clinic and his patients. His wife Lucie (Scott Thomas) spends her days tending their impressively large garden, baby-sitting their grand-daughter and visiting her depressed sister who is often sectioned. When red roses start arriving for Paul at the clinic and at home, the cracks in their marriage begin to appear. Lucie is obviously bored and isolated by her husband’s career and long hours. 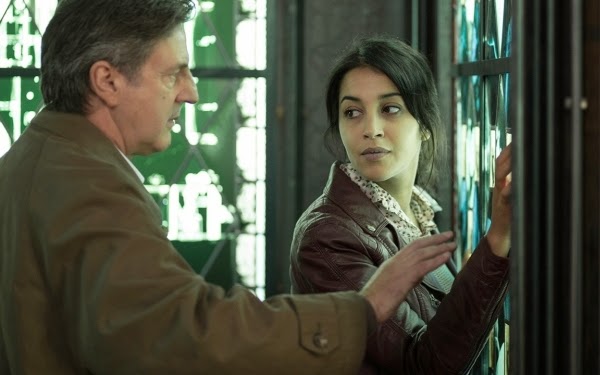 Paul, however, becomes ever more convinced that he’s being stalked by a beautiful young woman. Lou (Leïla Bekhti, star of 2011’s The Source) works in a bar and claims that Paul once operated on her. He begins to see Lou everywhere: at a concert, in his clinic, on the street and at a local flower shop. Paul becomes increasingly irascible and after a melt-down during an operation he is signed off work and told to take a rest. When Paul confronts Lou, she denies stalking him but appears keen to see and spend time with him. Paul is flattered by her interest and in return is curious about her Moroccan background and studies as an art student. They share confidences about their pasts. Increasingly, he finds himself drawn to her and gradually this turns to obsession. He claims to love Lucie but she ultimately feels betrayed.

The central metaphor of Before the Winter Chill feels a little trite – Paul and Lucie are in the autumn of their marriage and their watershed takes place as the trees’ leaves begin to colour and fall. Both Auteuil and Scott-Thomas have previously starred in films about couples in crisis so their roles feel familiar, but this doesn’t spoil our enjoyment of their performances. Scott Thomas perfectly captures the pain and fear of a faithful, loving wife who fears her husband’s betrayal. Auteuil is also convincing as a once confident man on the verge of losing his bearings while Bekhti is an alluring femme fatale who elicits both our sympathy and distrust. Claudel ratchets up the tension and keeps us guessing about Lou’s true identity and motivations until the film’s chilling denouement. Before the Winter Chill is an affecting drama about male vanity, the comforts of love and the need to be desired even in old age.