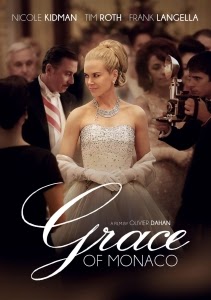 Olivier Dahan’s Grace of Monaco (2014), about the marriage of Hollywood film star Grace Kelly (Nicole Kidman) and Prince Rainier (Tim Roth) is beautifully shot but lacks depth and tension. When Grace married Prince Rainer III of Monaco in 1956 it was like a fairy tale come true: iconic beauty gets her prince. But Grace sacrificed a successful career for her marriage and Dahan’s film opens six years later when the cracks have begun to show. Grace finds it lonely bringing up two small children, while her husband is increasingly absent from the palace; embroiled in a row with France and dealing with affairs of state. So when Alfred Hitchcock (Roger Ashton-Griffiths) turns up to offer her a part in Marnie, she’s sorely tempted. 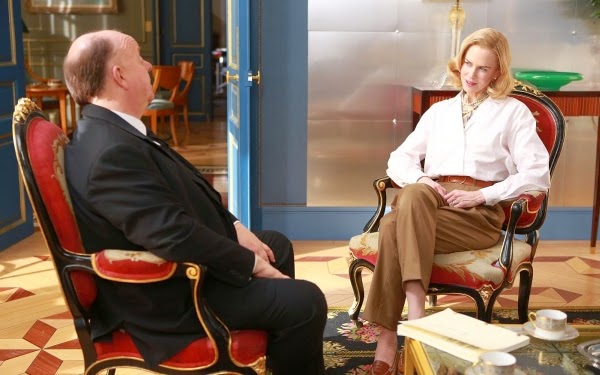 General Charles de Gaulle (André Penvern) is threatening to annex Monaco because it offers a tax haven to French companies and wealthy individuals. Rainer is understandably tense, but takes it out on Grace – telling her off for speaking her mind and publicly ridiculing her new haircut. He becomes even more irascible, when he discovers that Grace is thinking of returning to Hollywood and that two close members of his retinue have betrayed him. Grace struggles with her personal desires and priorities – Maria Callas (played by Spanish actress Paz Vega) advises her to stay true to herself and stick to what she’s good at. Fortunately for Rainer, Grace’s indecision is short-lived and she decides to throw in her lot with her husband. Unfortunately for the audience, any remaining dramatic tension is leached from Dahan’s film.

In an attempt to win over the Monaco people and embrace the role of a princess, she receives an intensive training in royal etiquette from Count Fernando D’Aillieres (Derek Jacobi). Grace then holds a lavish banquet aimed at saving Monaco’s interests and, at the same time, manages to charm the bolshy French president. Grace of Monaco is good on period detail, there is plenty of eye candy (accentuated by the frequent close-ups of Kidman’s face and body), and fashion aficionados will undoubtedly enjoy Gigi Lepage’s stunning costumes. But even a stellar supporting cast, including Frank Langella as Grace’s confidante, Father Francis Tucker; Robert Lindsay as Aristotle Onassis; Parker Posey as Grace’s lady-in- waiting; and Geraldine Somerville as Rainier’s sister Princess Antoinette can’t salvage a clunky script and a schmaltzy denouement.