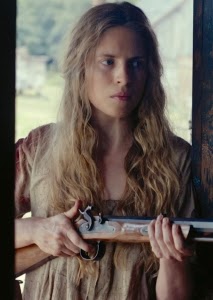 Contorting the standard gender expectations of its genre, Daniel Barber’s The Keeping Room (2014) arrives at the BFI London Film Festival on the back of considerable praise. Investigations of masculine identity regularly pass the time of day in traditional Westerns, yet this revisionist incarnation turns its attention away from the horrors of the Civil War battlefield and instead chooses to focus on the experiences of the women on the home front. The result is an atmospheric drama that fuses the bones of a home invasion flick into a gripping exploration of those exposed to the destructive forces that drive the kinds of characters that usually inhabit these harsh cinematic environs. 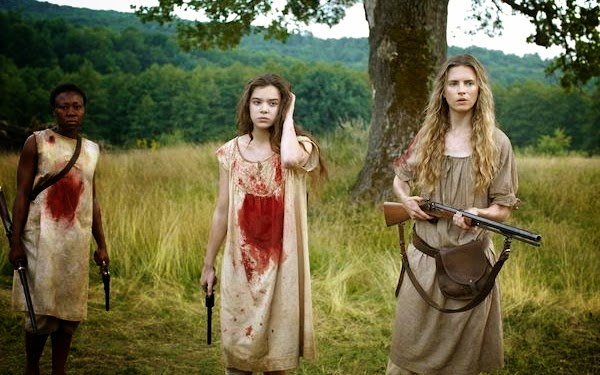 Augusta (Brit Marling) and her sister, Louise (Hailee Steinfeld), live together on a farm in South Carolina. With their father and brother having long since departed to join the war, the two young women and their African-American slave, Mad (Muna Otaru), are left alone to eek out an existence on their land. Despite the rolling landscape and picturesque woodlands – captured with elegiac beauty by acclaimed German cinematographer Martin Ruhe – there is always a rifle close at hand and any sudden noise warrants caution. When Louise is bitten by a raccoon, Augusta heads out to find the medicine she requires. However, her actions draw the attention of two hell-raising Yankee scouts (Sam Worthington and Kyle Soller) who descend upon the house with malicious and lascivious intent.
An opening quotation from General Sherman asserts to war’s cruelty but it is framed far more succinctly by one of the film’s central women – “once that gun goes off, everything living is gone.” There is no revelry in violence as the taut standoff ensues with Marling and Otaru given the opportunity to show their mettle. Quieter moments do punctuate the tension – though the mood never sheds the lingering stench of impending death – and the characters are allowed time to breathe and inject a little colour to their long-standing relationships. Where Marling commands the show as the tough leader, Steinfeld gets to play a young girl quite unlike her previous western turn in the Coens’ True Grit (2010).
Through Otaru’s scintillating performance as the servant – but not quite subservient – Mad, the film engages with wider atrocities committed against women as well as issues surrounding race. Even when she is required to add substantial heft via a sickening monologue, she pulls it off with aplomb adding texture rather than detracting from the suspense. It’s at moments like this where The Keeping Room is at its best, and the fierce, nerve-shredding confrontation is only elevated by its trio of fine performances and the film’s unique and welcome perspective.
The BFI London Film Festival takes place from 8-19 October 2014. For more of our coverage, simply follow this link.
Ben Nicholson