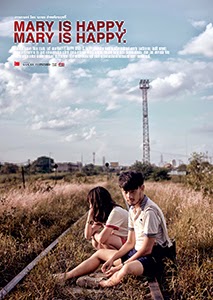 The internet use to be a place to hide, a refuge in which online gamers, chat room enthusiasts and message board trolls could cultivate a new identity. As the years have passed and the popularity of social media has risen Internet culture has evolved so that our online identities now pertain to mirror our offline personas. However, as we all know these identities remain a romanticised reconstruction of our lives and rarely does the virtual personality correlate to the real. In Nawapol Thamrongrattanarit’s playfully meta-fictional Mary is Happy, Mary is Happy (2013) this disconnect is explored by representing the parallel between our passive physical form and the idealised image of ourselves we construct online. 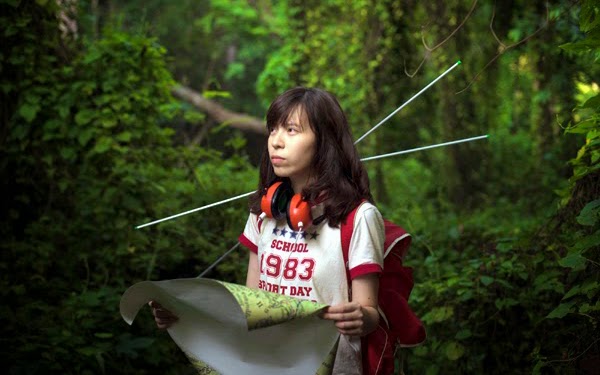 The Thai director fashions his narrative around 410 consecutive tweets by @marylony – how very #postmodern. The script focuses on the relationship shared between two teenage girls – Mary (Patcha Poonpiriya) and her best friend Suri (Chonnikan Netjui). Mary’s been made editor of the school year book and hopes to create a minimalist publication, full of inspirational quotes and student portraits taken at the magic hour. However, this isn’t your average high school drama, and unbeknownst to Mary her life is dictated by the words of @marylony, with each of her tweets superimposed on the screen. Sometimes Mary speaks the tweets as dialogue, other times they describe her feelings, with each tap of the ‘enter’ key pushing the narrative forward in Thamrongrattanarit’s fractured version of reality.

As an experimental approach to storytelling Thamrongrattanarit’s sophomore feature is a fascinating exploration of adolescent insecurity, depression and identity in a world dominated by social media trends and online personalities. However, the end product can be hard to stomach and the director’s reliance on surrealism and whimsy to correlate the unedited tweets of @marylony with his protagonist’s plight leads to a series of short, erratic scenes of arbitrary randomness. These range from everyday actions to more elaborate events such as the delivery of a frozen jellyfish, a random trip to Paris (one of the film’s many nods to the Nouvelle Vague) and a reconnaissance trip to the jungle. It may sound like a delightfully quirky voyage, but the lack of any formal structure to the character’s narrative arc means this highly improvised approach soon becomes exasperating. Worse perhaps is the entropy and mind-numbing absurdity of the tweets that pepper the action, ranging from ridiculous proverbs like “Confusion is like putting Sun cream on at night” and “4+3=8 Nothing is certain” to the inane documenting of every day events that litter @marylony’s feed.

Whilst commendably highlighting the inconsequential deluge of information churned out via social media sites like twitter, this approach does little to enamour the audience to Thamrongrattanarit’s high concept incarnation of @marylony’s digitised stream of consciousness and his off-beat depiction of contemporary malaise. At 126 minutes, Mary is Happy, Mary is Happy struggles to hold the attention. Characters, whilst somewhat sympathetic, never feel fully fleshed out and the teenage angst that pours from the screen is hard to relate to when the world it inhabits is so alien. By sticking so rigidly to his conceptual framework Thamrongrattanarit ultimately fails to connect to the audience on a personal level, with the film’s larger themes ultimately suffocating the onscreen action. Genuine moments of beauty from cinematographer Phairat Khumwan’s elegant composition and some fleeting humour make this an admirable exploration of how social media affects our emotional wellbeing, yet this fascinating experiment fails to coalesce into a relatable viewing experience. Thamrongrattanarit is clearly a director to keep an eye on, especially if he can align his conceptual methodology with a story as pure and poetic as his imagery.