Set in the Cheonggyecheon district of Seoul City, acclaimed South Korean director Kim Ki-duk’s 18th film, Pieta (2012), tells the story of Kang-do (Lee Jung-jin), a loan shark debt collector, who – when his clients can’t or won’t pay – resorts to crippling them in one way or another and cashing the insurance claims they’ve already signed up to (“Death messes up the claim”, he tells a man). He’s a pitiless, towering figure, who doesn’t even have enough humanity to be properly sadistic, remaining coldly unsympathetic throughout. Yet, Kang-do’s own private life is as blank, cold and tragically empty as his facial expression.

Kang-do lives in a bare apartment with few if any luxuries, masturbates and eats meals consisting of animals (chicken, eel etc) he messily butchers himself in the bathroom, leaving the offal on the floor. His life is fixed on this path until the arrival of a woman, Mi-sun (Cho Min-soo), who claims to be the mother who abandoned him when he was a baby. Will he reject her and her begging for forgiveness or will he accept the possibility of human feeling and redeem his past actions? 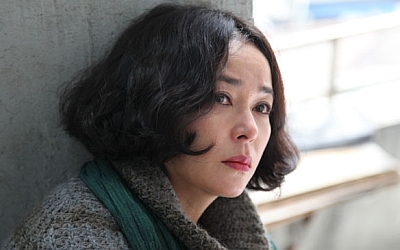 There is something of the Greek tragedy, as well as the Jacobean variety, in Pieta. Ki-duk evokes the pain and cruelty without resorting to the kind of extreme horror South Korean cinema has made its own. In fact, although there is the family nightmare, Ki-duk is more interested in the savagery of a capitalism stripped to the bone, bloody in tooth and claw. Money is talked about more than in a Jane Austen novel, figures are constantly bandied around and everything has a price including limbs, the ability to walk, and family members.

Kang-do’s victims are all small-time craftsman trying to make a living with machine tools and grease, their fragile existence ruined by the vagaries of the financial markets and a slight drop in the price of copper. Once they fall behind in their payments of interest, the victims are literally fed into their machines, the way Charlie Chaplin was thread through the industrial machine in 1936’s Modern Times. The neighbourhood of corrugated lean-tos is in the process of being eaten up by development and Kang-do is simply a vicious representative of that process.

The performances of the leads could well place Pieta in contention for some recognition from this year’s Venice Film Festival jury and Ki-duk is to be praised for a searing denunciation of a vicious capitalism without pity, but in a world where the possibility of love and pity still exist – a truly remarkable statement.

This review of Pieta was originally published on 9 September 2012 as part of our Venice Film Festival coverage.