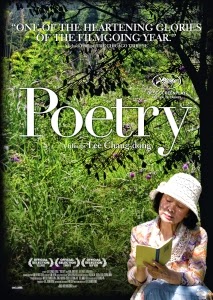 The intensity of language and the beauty it conveys are visually explored in Chang-dong Lee’s Poetry (2010), a film which manages to fashion the vividly imaginative nature of a poem, against a narrative saturated with themes of human misery and which includes a breathtaking performance from one of South Korea’s most revered actresses – Jeong-hie Yun. Mija (Jeong-hie Yun) is an elderly lady with an infectiously joyful energy that negates the climate of misery which currently dictates her life. She cares for a disabled older man in order to cobble together enough money to sustain herself and her dim witted grandson (whom she is the sole guardian of).

Her life is one of fleeting moments of elation interspersed across countless incidents of immense dejection and feelings of insignificance. The grandson is currently being accused of a horrifying transgression, all whilst Mija is coming to terms with having been recently diagnosed with Alzheimer’s – a condition condemning her to an uncontrollable downward spiral into dementia. In an attempt to communicate her complex range of emotions she takes up a poetry class at the local arts college. The students are assigned the relatively simple task of creating one poem by the end of the course – but how can Mija possible create a composition of prose to express the beauty which quietly resides in the world when her vocabulary is slowly diminishing and her life is consumed by sorrow and guilt? 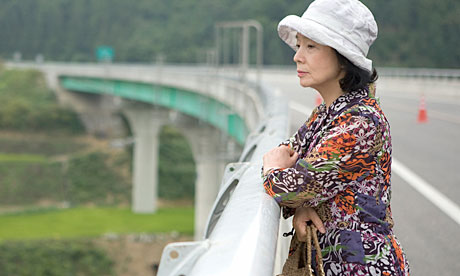 Lee’s sobering vision of an emotionally paralyzed woman coming to terms with her degenerative condition through a dying art form is as graceful and expressive as the most emotive of Sonnets. Eloquently achieved through a use of tranquil pacing and a heightened artistic approach to filming, Poetry successfully captures the emotional numbness which can often accompany such devastating events, whilst simultaneously illuminating the subtle strokes of beauty which often present themselves at these moments of magnified mortality.

Jeong-hie Yun’s performance is what ultimately transforms Poetry from a sombre tragedy (albeit a visually stimulating one) into an immersive character drama. Returning from a 16 year retirement her performance is tremendous, perfectly conveying her character’s obsequious demeanour and naive sensibilities. With little action and a sparing use of dialogue, Jeong-Hie has little chance to articulate the turbulent range of emotions her character is goes through, however, when she is given an opportunity to express herself, her lilting mannerisms convey such a subtle blend of deep emotions it’s difficult not to become transfixed by her delicate and innocent manifestation of the character.

Like any poem of literary importance, Poetry demands that you read between the lines, listen to what’s not said and study it meticulously to grasp its hidden meaning. With a dark vein of immoral behaviour brewing beneath its pleasant exterior the spiritual messages of peace and love often associated with poetry are nowhere to be found. It’s this calm and calculated delivery that may alienate many viewers. A distinct lack of tension or any signs of moral retribution create a particularly unsatisfying conclusion to the film’s previous events which required such devout patience, however, Poetry is a deeply philosophical experience, designed to leave a lasting impression and not intended to be instantly gratifying piece of entertainment.

Chang-dong Lee’s Poetry is a superbly well crafted story that flows as elegantly as its namesake. Its underlying beauty, whilst only revealing itself after some deep searching, is as rewarding an experience as you could expect from such dark subject material. Persevere with Poetry and you’ll discover an intensely moving film about inexorable optimism in the face of uncompromising negativity and despair.

This review of Poetry was originally published on 18 November 2011.