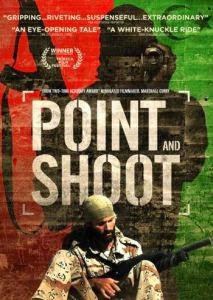 Point and Shoot (2014) is a bizarrely fascinating documentary, recording the adventures of Matt VanDyke, a young American from Baltimore who ended up fighting in and filming the war in Libya that saw the overthrow of Col. Moammar Gadhafi. With a extensive use of his own footage and some animation and talking head interviews, we see VanDyke, a privileged young white male with Obsessive Compulsive Disorder, who was inspired by repeated watchings of Lawrence of Arabia to head off to North Africa in 2011 with a motorcycle and a camera. A 36,000-mile road trip ensues as VanDyke seeks out a what he describes as ‘crash course in manhood’. 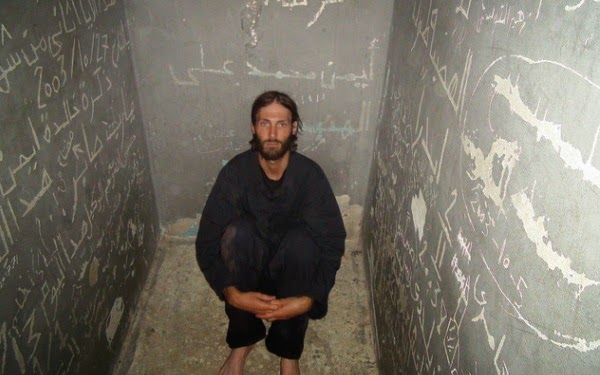 He hopes will compensate for his cushy life with his long-suffering girlfriend and his mom doing his washing for him. The fact that it doesn’t occur to VanDyke to skip the Middle Eastern adventure and just do his own laundry is one of the many ellipses the film fails to explore. There are a few bumps along the road – a motorcycle crash breaks VanDyke’s clavicle – but he is soon reinventing himself as lone wolf adventurer, complete with a new name (Max Hunter, for the love of God! Max Hunter?) and a boot knife. He hangs out with soldiers in Iraq, parleys his way into a war correspondents job and meets up with a Libyan hippy called Nuri who becomes his friend. Having returned to the States, VanDyke is set to return to normal life when the Arab Spring hits Libya and civil war breaks out.

That day, VanDyke is driven to the airport by his mother, with his understandably sulky girlfriend riding beside him, to fly out to Egypt and from there to make his way into the war zone and join a now slightly-less-hippy-looking Nuri. VanDyke is captured and imprisoned for six months. Upon being freed, he puts on the uniform once more and now participates in the fighting alongside his Libyan friends. Here the omnipresent camera is joined by all those mobile phones and VanDyke himself becomes a bit sniffy about it. ‘Everyone wants a picture they can put on Facebook,’ he says, which is a bit rich coming from the narcissist who is constantly preening and posing. The temptation is to read these misadventures as a larger symbol for the war tourism of American foreign policy over the last decade and a half. His blithely under-informed intervention is more about the thrill of doing something and self-realisation as a Rambo-esque warrior than any real belief in the cause.

Politics go unmentioned. It’s about protecting his new found buddies, as if the Libyans were basically Ewoks. It’s also a kind of therapy for his OCD. VanDyke is willing to kill people and risk his life, but freaks out about sharing cutlery and when someone spills sugar in his war truck. Too many of his arguments and justifications go unchallenged, as is the danger when the subject of your documentary is also a producer and for the most part cameraman – he’s credited, with no small amount of grandiosity, as ‘cinematographer’. The one question director Marshall Curry keeps until the end – “did you actually kill anyone?” – feels beside the point and a sly attempt to exonerate VanDyke from the nitty-gritty consequences of what he was doing. An undoubtedly unintended and unwanted context has been provided by the Paris shootings. Here are other civilians of Western democracies who are also influenced by the media, filming little video diaries of themselves and are also finding self-expression, resolving their masculinity through violence. But they don’t have OCD.