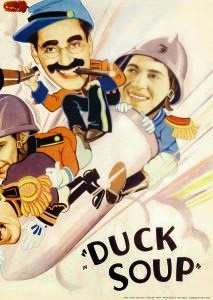 Within its opening premise, the concept of a utopian Freedonia, the Marx Brothers’ glorious Duck Soup (1933) is already flinging mud in the eye of Western democracy. Bankrupt, the aforementioned country’s lofty name is skewered when it is hauled back into the black by its richest citizen, Mrs. Teasdale. She insists on replacing the ousted premiere with a bold new leader of her choosing. The power of money may be absolute, but it’s the enduring power of absurdist humour that is evident in her selection – Groucho Marx’ wise-cracking Rufus T. Firefly. Leo McCarey’s film throws meaningful narrative out of the window, presenting a masterclass in political satire and gut-busting slapstick. 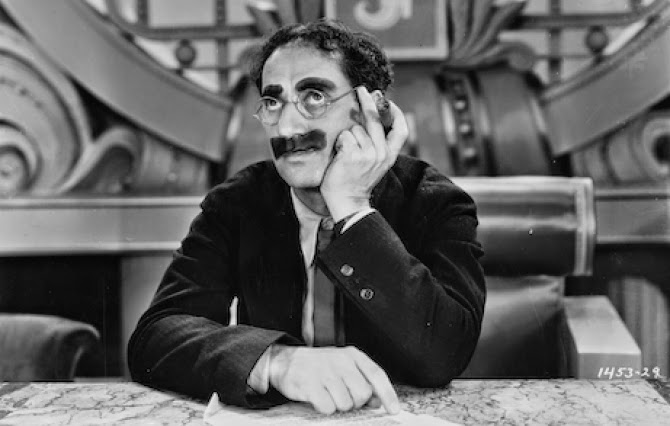 Supposedly, the Marx Brothers were all for making another uproarous and surface level comedy and it was McCarey whose influence led them to the film’s greater bite. This may be what has led to its revered position amongst the comedians’ cannon. For every trip and pun, there’s sly undermining of statesmanship and conflict. With fascism rising in Europe, the lampooning of Groucho’s dictator was of timely importance, though of course not as overt as Chaplin’s The Great Dictator (1940). Where the latter’s Hitler had his balloon globe, the brothers bare their own comedic arsenal; Groucho’s one-liners, Chico’s whip-smart mouth, Harpo’s effortless physicality. The latter two arrive on the scene to spy on Firefly but find – and more important, give – far more satisfaction larking around.

One of the most famous sequences of the brothers’ entire career sees Harpo disguised as Groucho and stood opposite him in place of a broken mirror, pretending to be his reflection. It is a flawlessly performed scene of utter genius, that grows ever funnier the longer the duo manage to sustain it. Elsewhere many of Groucho’s most memorable quips are fired in the direction of his hapless cabinet and retinue. “Remember, you’re fighting for this woman’s honour, which is probably more than she ever did.” A dust-up with the neighbouring Sylvania is inevitable and attitudes about the First World War – its trivial beginnings, trench warfare – are voiced through the humour.

It is interesting to consider just how relevant this film remains, particularly given the recent furore over Seth Rogen and James Franco’s The Interview (2014). Try as they may, though, it is unlikely that audiences will still be howling with laughter at their Kim Jong Un send-up in eighty years time. For the Marx Brothers, they’ve managed to retain their appeal in all areas and Duck Soup stands as the apex of their achievement. Under McCarey’s stewardship they say something meaningful and necessary, but most importantly they make you laugh and laugh ’til the cows come home.