As We Were Dreaming (2015), a coming of age tale about a group of friends growing up in Leipzig, is German director Andreas Dresen’s competition entry for the Golden Bear adapted by Wolfgang Kohlhaase from Clemens Meyer’s award-winning novel of the same name. As the film opens, Dani (Merlin Rose) is looking for his friend Mark (Joel Basman) in an abandoned cinema. We then travel back in time to their recent past. The wall has fallen and East and West have recently reunited. Dani, Mark, Paul (Frederic Haselon), Pitbull (Marcel Heuperman) and Rico (Julius Nitschkoff) run riot every night, drinking, stealing, hot-wiring cars and smashing them up. 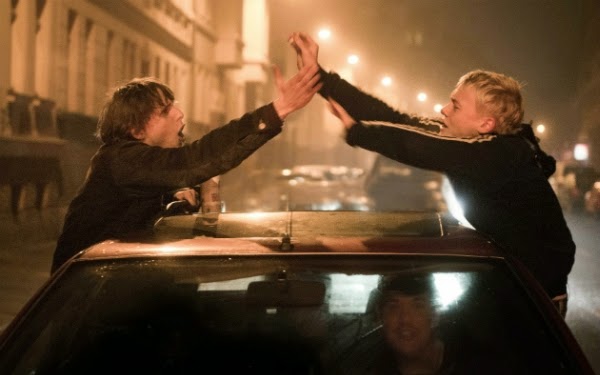 Through a series of flashbacks, we learn of their school days as young Pioneers, drilled to be loyal to Socialist ideals. As a child Dani had hoped to be a journalist, he won his school’s poetry competition, while Rico dreamed of becoming a champion boxer. As teenagers, the friends open an underground club in a dilapidated building, but a rival gang of neo-Nazi skinheads decide it’s on their patch and start kicking up a storm. Matters are further complicated because Dani is obsessed with Starlet (Ruby O. Fee) the girlfriend of the rival gang’s leader. Refusing to bow to pressure, Rico, Mark and Dani are badly beaten-up. As they grow older, things only get worse. Paul considers working in porn and Pitbull starts dealing drugs. Dani spends time in a youth correctional facility, Mark becomes hooked on heroin.

Unremittingly high octane and sometimes graphically violent, As We Were Dreaming won’t appeal to all tastes. Some audience members left during Dani’s brutal beating. As they are all proudly delinquent, it’s hard to feel sorry for any of them. Dani is the most sympathetic but he betrays his two friends when they are being chased by the gang. The zeal with which they steal and smash things up becomes depressing after a while. The narrative is punctuated with snappy chapter headings such as ‘Gutter Hound’, ‘Rivalry’ and ‘Thunderstorm in the Brain’, but there is little else to dispel the overriding atmosphere of alienation and despair. Meyer, born in former East Germany, has described himself as a “child of the street”. Like Dani he spent time in a youth detention facility but put his experiences to good use by penning acclaimed novels. One can’t help yearning for similar redemption for his characters for there to have been some emotional journey worth taking, but the film’s bleak ending offers little in the way of hope. Superb performances from the young cast and Michael Hammon’s evocative camerawork are the main compensation for a relentlessly bleak story of lost youth.