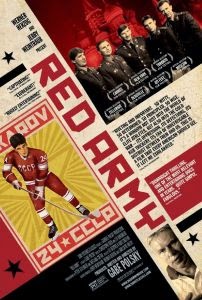 If you thought ice hockey was just Canadians and punch-ups, then Gabe Polsky’s documentary Red Army (2014) may come as a cool eye-opener. Featuring candid interviews with the surviving members of the Soviet Union team, as well as chunky 1970s-80s footage with some slick graphics thrown in, Polsky paints a vivid picture not only of this dynamic sport but also of a country in the throes of seismic changes. Having queued for hours, Viacheslav Fetisov failed his first audition to enter one of the most prestigious academies of ice hockey, but returning the next year was accepted and recruited into the army at the age of eight in order to be trained as an ice hockey player.

The practice was hard and part of a massive systematic attempt to utterly dominate the sport. This was not just a game, but propaganda. The emphasis was on teamwork, intricate passing, high levels of technical and tactical skill and a fanatical demand for victory. If collaboration was consistent with the socialist ideal, the tactics and approach had older sources in Russian culture. Chess grandmasters were consulted on tactics and the Bolshoi called in to help with movement training and flexibility. Fetisov is at the heart of the documentary and the historic story of ice hockey in the Soviet Union, even as the country headed for Glasnost and dissolution. He’s also a tricky interviewee, showing Polsky some of the attitude which made him hard to contend with whether you were a coach, an opponent or the authorities. 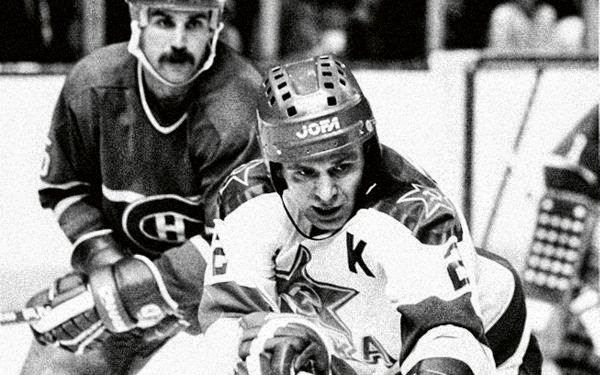 The Red Army has a special five-man grouping, whose telepathic passing would dizzy their opponents into something of a stupor before an opening was spied and a powerful shot driven in from anywhere on the ice and into the goal. They were basically Barcelona on ice. However, not everything was plain sailing. When the beloved coach made a political error – pulling his team off the ice after a refereeing decision went the wrong way and Brezhnev was left waiting in the stands along with the rest of the spectators – he was fired and replaced by a new mandarin who brutally set about imposing his own power at the cost of success. The result of this was a disastrous, unexpected and humiliating defeat by the USA – dubbed the ‘Miracle on Ice’ by the clearly surprised victors – at the 1980 Olympics.

Throughout the eighties the winds of change (as The Scorpions might have it) began to blow, and Fetisov began to look to the possibility of playing in the NHL. The off-ice war to keep Fetisov in the USSR, even though he now refused to play in the team, makes for fascinating viewing and the further testimony of a KGB man on how the team was watched and controlled likewise. When Fetisov finally got his chance, he was bemused to discover that the Americans simply couldn’t play the Soviet style. We’ve had many excellent sports documentaries recently – Senna (2012) being an obvious standout – and facilitated by German director Werner Herzog (who gets a producer’s credit) Polsky has produced a slickly entertaining piece of Cold War history. His relaxed attitude irreverent interviewing style allows for some wonderful little moments. The KGB man’s daughter interrupts to ask for ice cream and, early on, Fetisov gives Polsky the finger.

In fact, Fetisov’s intransigence on some questions is probably a function of his second career as a Putin-groomed politician, but it’s also a sobering corrective to Polsky’s occasionally simplistic preconceptions. “Tell us about the queueing,” Polsky asks, only to get short shrift. If there’s one criticism, it might be that with so much story to tell, the 85-minute runtime perhaps leaves out a little that would have been of interest, in particular the ice hockey itself. Although we get some highlight clips, it would have been nice to have had perhaps the story of a hinge game, for instance the defeat by the Americans which Polsky shows through a score board and a series of reaction shots of the present day as Fetisov watches an old tape, though it’s still fascinating to see the pain on the man’s face over thirty years after the fact. Polsky keeps Red Army driving forward and the result is a film as fast-paced and bloody-minded as the sport it celebrates.