Another year, another film from prolific French director and festival regular François Ozon. After the (intentional) inscrutability of the lead in Jeune et Jolie (2013), his latest film The New Girlfriend (2014) is thankfully a far deeper exploration of its two equally complex central characters. Based on a Ruth Rendell story – though inflected with considerably more humour by all accounts – it explores a burgeoning relationship between a widower and his departed wife’s best friend on a sliding scale of gender and sexuality. Ozon’s inconsistency of tone is once again present, but on this occasion he just about carries it off, crafting a thoughtful comic drama led by a pair of fine and nuanced performances. 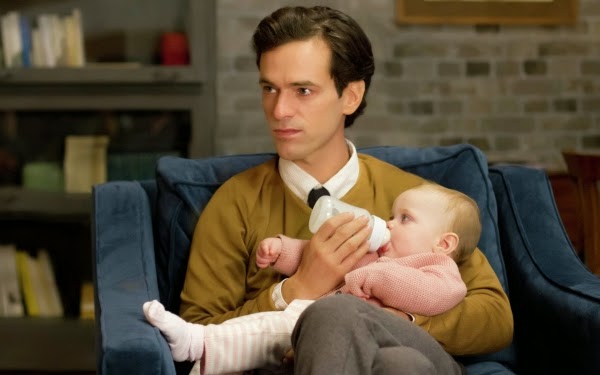 A humorous opening montage hints that we’re watching a beautiful woman dressing to be married, before revealing that the wedding regalia are in fact for her funeral. Laura has died young and left behind a charming husband, David (Gallic heartthrob Roman Duris), their tiny baby Lucie and lifelong BFF Claire (Anaïs Demoustier, Bird People). “A la vie, a la morte,” the pair chant in a childhood flashback, and the Laura shaped hole looms large throughout. Promising to do right by David and Lucie, Claire stops by one day to check how they are doing and happens upon an unexpected scene. David is sat feeding Lucie decked out in makeup, a dress and a wig. After an initial shock, Claire comes to accept David’s tendency and they strike up a closer friendship than they had before Laura’s death – particularly when David is ‘Virginia’.

Attempting to blend together elements of a cheeky cross-dressing comedy and a more studied psychological pot-boiler has the potential to crash and burn disastrously. Whilst there are certainly moments in which conflicting priorities undermine both agendas, largely Ozon does manage to maintain the fine balance between the different elements. David’s initial appearance as a woman is played for giggles, but as the runtime wears on, the continuing laughs come more from the mechanics of managing his transvestism than humour derived from his preferences. This is helped no end by an intelligent and subtle turn from Duris. Whilst his arc is hamstrung by narrative requirements, he keeps things authentic throughout.

Ozon clearly has fun with filming and dressing him, though – evoking how audiences might usually see a voluptuous woman shot. There are gags within that too and Ed Wood fans will see a nice nod in a late scene. While Laura’s death is a catalyst for Daniel, it also leaves a gaping hole in Claire’s affections and she finds herself more and more drawn to Virginia. It is a role that equally requires a lot from Demoustier and while she is overshadowed by her co-star, it’s a compelling performance conveying an array of uncertain bubbling desires. Together they pull The New Girlfriend through its shakier patches, lending weight to the fluff and leavening the more overtly serious.