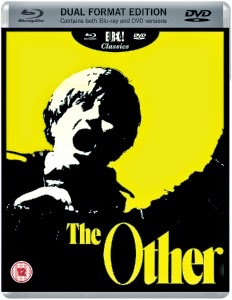 Identical twins are a staple of the horror genre pantry, a corporeal conduit in which to explore the dichotomy between good and evil. Frequently presenting an image of innocence alongside a capricious, often deadly parallel, the audience is forced to look beyond the superficial for deeper understanding. In the eerie, yet tepid psychological horror The Other (1972), based on the bestseller by actor Tom Tryon, the presence of twins allows director Robert Mulligan the perfect outlet in which to identify and exorcise the darkness that dwells within all of us. Played by real-life twins Chris and Martin Udvarnoky, Holland and Niles become absorbed in a mystical ‘game’ they learn from their grandma. 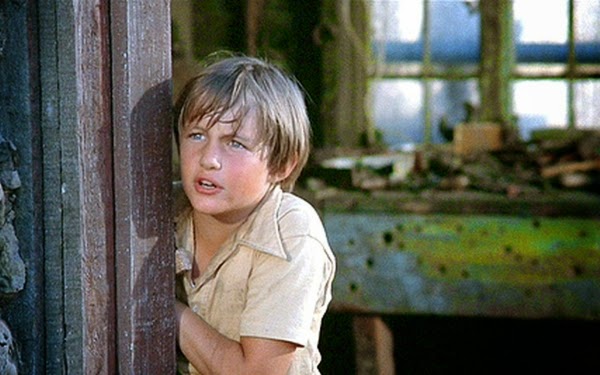 During this time horrific accidents begin to occur on their small, Depression-era farm in Connecticut. The twins’ father is killed by a falling trapdoor and later their mother is left mute after she ‘falls’ down the stairs. Their cousin Russell comes to a sticky end, and is found impaled on a pitchfork in the hayloft. When a newly born baby is substituted by an ugly doll and later discovered drowned in a barrel of wine the grandmother begins to suspect the twins. The Other could be read as a supernatural thriller, or as a troubling portrait of mental illness and the deliberating psychological effects of grief depending on your own interpretation of events. The predictable twist is poorly veiled in a hazy musk of rural romantasicim that tempers the film’s gothic undertones with a sundrenched layer of nostalgia.

The bucolic image of rural life is only removed once, in a fascinating scene where Niles goes to town and sneaks into the freak show of a traveling circus. As he observes these showmen as they relax in their dressing room we realise that beauty is only skin deep, their menacing veneer rendered benign once viewed away from the spotlight. Tight, constricting close-ups of Niles’ point of view allude to the evil that festers behind Holland’s youthful innocence, but by restricting us to one perspective we’re aware that we’re only getting half the picture. Despite writing the screenplay Tryon would later talk of his own disappointment with the film. When interviewed in 1977 he explained how it was ruined in the editing suite – “God knows, it was badly cut and faultily directed.”

Indeed, Mulligan’s rote approach to storytelling never manages to capture the suspense Tryon’s novel became famous for. There’s a sophisticated lyricism to how the story unfolds, yet any tension harnessed within the prose is diluted by an inability to create a suitably disturbing atmosphere. The ‘twist’ should provoke shock and awe, yet is delivered in such a matter-of-fact fashion that it undermines the unsettling sense of confusion that proceeds it. As a portrait of small town America The Other may be an eerie image of cold-war paranoia, yet to be enjoyed as a sinister psychological horror you’ll need to be prepared to rummage through the pastoral adornments to pinpoint the root of unease.