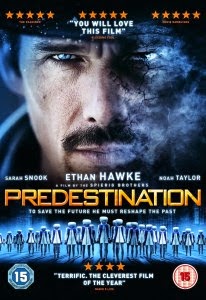 Michael and Peter Spierig’s Predestination (2014) is a tricky little thinker of a film that delivers on the promise of time-travelling shenanigans. While the previews for the film bill it as an action-packed thriller, make no mistake: this is a film that will challenge your notions about the moral and technical workings of time-travel. Viewers are given more twists than expected in a sincere but simple fashion, definitively upping the ante on what to demand from future films of this ilk. In a dingy bar in the 1970s, The Barkeep (Ethan Hawke) meets The Unmarried Mother (Sarah Snook). The two begin chatting when she promises him that she has the story to end all stories. 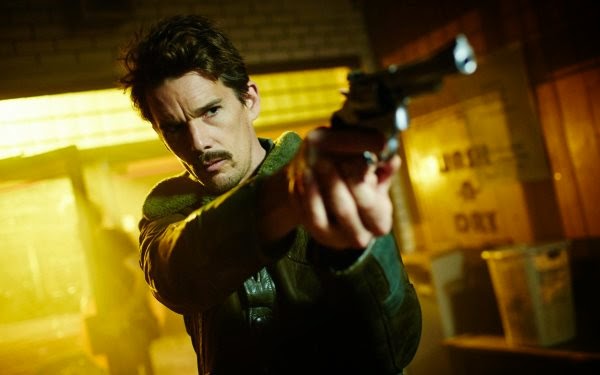 What follows is the recounting of the intriguing life of The Unmarried Mother aka Jane, an intersex woman who is haunted by her orphan past and clouded future. When The Barkeep reveals that he is able to put the man who ruined her life right before her, they are thrust into a time-travelling revenge mission that reveals fatal truths about the precise nature of Jane’s existence. Predestination bends genre like it bends time. Simply put, it’s a character study filtered through a science fiction lens. There’s no excess of gadgets or special effects. The rules of time travel are blessedly short and sweet: you can travel no more than fifty years before or after the discovery of time travel itself. But the effectiveness of this story is owed to the jewel in Predestination’s crown: the incorporation of an intersex character.

While Hawke provides the draw, it is Snook’s portrayal of an intersex person that drives this film. She is a mutable figure on-screen, giving all parts of herself over to her portrayal of Jane/John/The Unmarried Mother in maverick style. Having a majority of the film dedicated to telling a story within a story can be a dangerous gambit, but to dedicate it to unravelling the mystery of just one character’s existence is, in this instance, a stroke of genius. In keeping such an ambiguous character as the canvas for the film to unfold onto, Predestination paints all of the philosophical and existential qualms or quibbles about time travel in a new light. It consistently challenges the audience’s attention to detail, demands to keep pace and forces us to look at the tiniest details for insights into precisely who its primary characters are. The film succeeds in its simplicity – a rare treat in a genre that often gives itself over to slavish intricacy. In the end, Predestination is a brainy sci-fi meditation on the convoluted possibilities of time-travel.