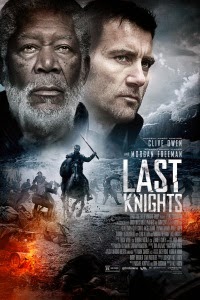 Over a decade on from the success of Peter Jackson’s The Lord of the Rings films, fantasy is still proving a crowd pleasing genre both in cinemas and on television. Game of Thrones continues to dominate the small screen, while Jackson’s own Hobbit trilogy is a multi-billion dollar success despite being anathema to many fans of the original films. Hoping to continue in this vein is Last Knights (2015), perhaps more medieval than Middle Earth but clearly aiming for similarities in tone and theme. Clive Owen takes the lead, playing a knight who gathers his comrades for revenge when his master is killed by a corrupt nobleman (Aksel Hennie). 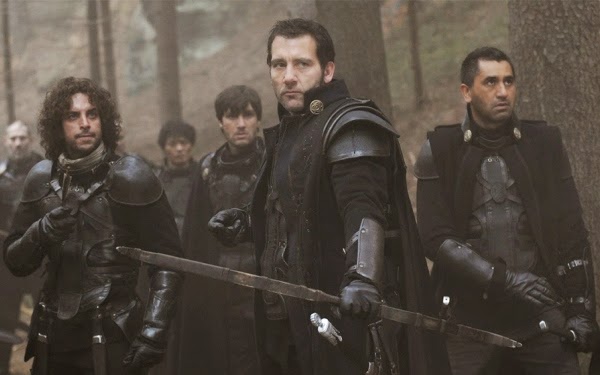 With impressive, ornate sets and a cast led by two household names (Morgan Freeman joins Owen atop the listing), on the surface Last Knights looks destined for a larger stage than its limited cinema and VOD release. A third of the way in to the two hour running time, however, it becomes clear that this is not the epic that was promised. Those lavish sets are filmed through a dreary, dull filter that, combined with an agonisingly slow pace, sucks all of the excitement out of the unfolding story – which, it becomes apparent, has very little in the way of original ideas. Bursts of violence are separated by endless exposition, with the cast earnestly struggling to cover up the fact that, besides a number of scenes where characters plan what they are about to do, not very much actually happens.

It is testament to Owen’s strengths as a leading man that even when there is so little for him to do, he still manages to be watchable. His first act scenes with Morgan Freeman (in a brief but characteristically gravitas-filled performance) are among the stronger of the film, and make the action-free void that follows all the more conspicuous. Similarly entertaining is Hennie, in one of the more substantial performances since his breakthrough in Headhunters (2011). Rather than a mere pantomime villain, Hennie makes his characters a coward who hides behind his influential connections then descends into paranoia when he begins to fear retribution. The climactic storm on the villain’s castle is impressive, but too late to salvage a monotonous and forgettable action fantasy. A shorter running time, or more action scenes, may have made the plot’s weaknesses less apparent, but on the whole a talented cast is wasted on such a formulaic endeavour.