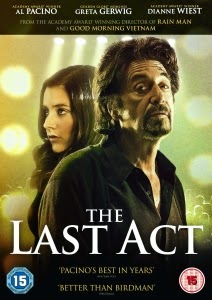 The shrouded world of the stage proved very much the theme of last year’s Venice Film Festival. Director Barry Levinson’s Philip Roth adaptation The Last Act (2014) is a bird of an entirely different feather to the screwball antics of She’s Funny That Way (2014) or the anarchic brio of Alejandro González Iñárritu’s Birdman (2014). Featuring a masterly turn by Al Pacino, The Last Act is actually closer to Pacino’s own theatre-based documentaries Looking for Richard (1996) and Wilde Salomé (2011) in its looseness and postmodern playfulness. It’s also by turns moving and very funny. Simon Axler (Al Pacino) is an ageing actor in decline and verging of a nervous breakdown.

Axler is finding it increasingly hard to differentiate between performance and reality, and perhaps more importantly is wondering if he can be bothered with either for much longer. Plagued by anxiety and aware of an audience more intent on their phones than his speeches, Axler abandons the stage in dramatic fashion, nose-diving into the empty orchestra. In his huge empty house in rural Connecticut a devastating ennui grips him and, when the solace of the whisky proves insufficient, bungles a suicide attempt, which in turn lands him in a residential care home. Even here, Axler turns the therapy sessions into a low rent version of In The Actor’s Studio. One inmate, Sybil (Nina Arianda), goes as far as to try to involve him in a plot to kill her husband because he once played a man who killed his neighbours.

Once released from the institution, Axler keeps in contact with his shrink (Dylan Baker) via Skype, recounting his doubts and anxieties not so much for the purposes of therapy as of voiceover. Things begin to change however when he meets and begins a relationship with the daughter of some friends Pageen, a phenomenal Greta Gerwig, who rise to the challenge of going mano a mano with Pacino with an irreverent gusto and wit. Pageen is a lesbian but for her childhood crush Axler she is willing to make an exception. She has a history of seduction and a series of exes – including an obsessed college dean (Kyra Sedgwick) and a girlfriend who has undergone a sex change (Billy Porter) – begin to creep around the grounds of the house. As complicated and bizarre as the situation increasingly gets – Pageen is draining him of funds and obsessing him constantly – she is also bringing him slowly back to life and perhaps even the stage.

The madness that saw Axler receive psychiatric treatment lurks and Axler is plagued by visions and delusions and as viewers we are never fully sure where the line is being drawn, if indeed there is a line. Likewise, is this really Axler, Roth’s Axler or Al. It looks very much like Al. Is Al having conversations or is that also part of an elaborate illusion? In the end, what does it matter? The whole world is a stage and as Axler arrives at the final of the seven ages, that of “second childhood”, his grip on reality slips, but it was never that strong in the first place. The result is a beautifully entertaining film. It’s certainly witty and the scenes between Gerwig and Pacino fizz alternately with flirtation, humour and occasionally rage. Levinson’s The Last Act is obviously and deliciously indulgent, but Pacino has earned it, as his agent (played by Charles Grodin) says: “He’s taken it to a whole new level”.