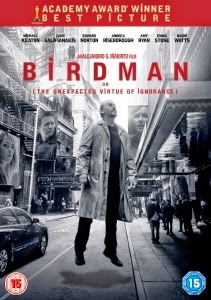 Mexican director (and now Oscar-winner) Alejandro González Iñárritu has toyed around with the elasticity of the medium before, most notably in the daringly non-linear 21 Grams (2003). With Birdman (2014) he once again attempts to turn the format on its head, concocting a visually exhilarating commentary on the pitfalls of celebrity and the process and art of performance. Presented as one continuous shot, it is a dizzyingly immersive experience to behold – jumps in time and between scenes are masterfully blended together. This is also the film’s Achilles’ heel, though, with the technique endlessly threatening to overpower the emotional content. 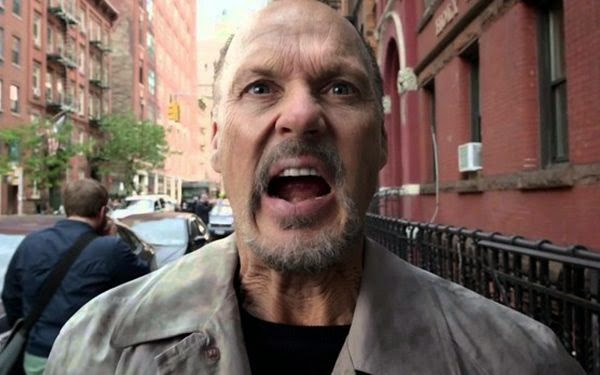 Far too pleased with itself in general, at times you half expect Iñárritu to lean in behind you in the darkened cinema and proudly reveal how the various moments of cinematic trickery were achieved. Determined to cast off the shackles of his superhero Hollywood franchise, A-lister on the slide Riggan Thomson (Michael Keaton) is in the midst of staging a theatre adaptation of a Raymond Carver book, source material far removed from his usual comfort zone. This colossal challenge is taking its psychological toll on the actor, and things are further exacerbated when he’s forced to replace one of his principles with an acclaimed Broadway thesp, brimming with ego and libido (Edward Norton) – who also happens to be the boyfriend of the production’s leading lady (the ever-dependable Aussie actress Naomi Watts).

Thomson’s insecurities are manifested in the appearance of his masked crime-fighting creation who continually taunts him backstage, but the beleaguered actor persists under the old adage, ‘the show must go on’. Parallels between reality and fiction are nicely paired here. Keaton was the first actor to kick-start the highly lucrative Batman cinematic franchise (something which undoubtedly became an albatross around his neck) and co-star Norton has been labelled historically with the ‘difficult’ tag. Those meta nods also spring up elsewhere, namely in the breezy jazz bursts that punctuate many of the roving transitions in the film, often slipping from diegetic to non-diegetic sound in the same shot, where an actual drummer is revealed. But for all the technical virtuosity and fourth wall-straddling on display, it’s actually the quieter moments which resonant the deepest, whether it be Norton and Riggan’s PA/daughter (Emma Stone) sharing an intimate conversation on the theatre rooftop, or the main character’s painful grasp at closure with his ex-wife (Amy Ryan).

Performance-wise, the film seldom puts a foot wrong. With the lines of age etched deeply in his face, Keaton has done jittery and manic before but never with this shading and fragility. He dives into the increasingly disorderly stage action and the meltdown he is suffering behind the curtains with fierce aplomb. If Keaton is the Ego then Norton is the id – a deeply narcissistic presence and borderline sociopath whose obnoxious bravado and one-upmanship threaten to torpedo the whole production. One exchange between Keaton and Norton is an incredibly accomplished Russian doll-like display of performance and had already become the scene wheeled out, ad nauseam, during awards season. Ultimately Birdman is a film more to be admired than loved. It’s undeniably bold and adventurous, often loitering around the edge of genius, but it’s a little too caught up in navel-gazing to ever really soar.