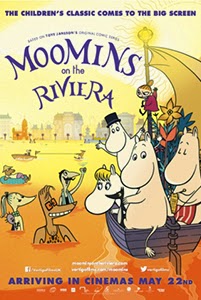 Nicely timed to coincide with the currently under way Cannes Film Festival, Moomins on the Riviera (2014) – based on Tove Jansson’s beloved books and comic strip – takes the eccentric hippo-like creatures outside of their comfort zone for a softly sweet fantasy adventure. In need of a change of pace and scenery from their idyllic valley home, Moomin (Russell Tovey), Moominpappa (Nathaniel Parker), Moominmamma (Tracy Ann Oberman) and Snorkmaiden (Stephanie Winiecki) head to the South of France. The sun-kissed, celebrity-packed beaches quickly catch the attention of Moominpappa and Snorkmaiden, who both lavish in the surroundings and attentions of others. 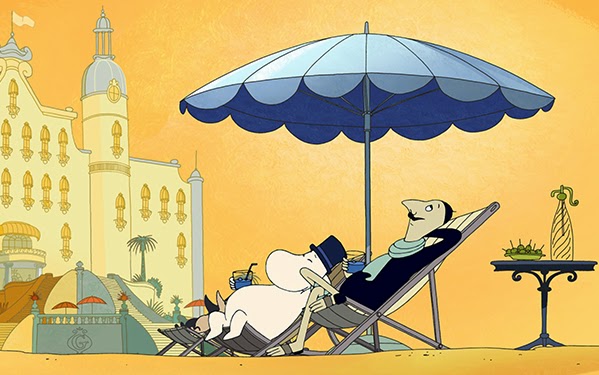 Moomin and Moominmamma are less dazzled, however, overwhelmed by a lifestyle so far from their own. Adopting a laid-back, effortlessly charming approach from the start, Moomins on the Riviera drifts through its short but sweet run time at a welcome pace. As the narrative unfurls and the characters each experience their own conflicts, the messages drift into view – the importance of family and how a flashy way of life is no match for the sweet familiarity of home are the two most prominent lessons. The general sense of well-meaning is scattered throughout some marvellously entertaining set pieces deftly handed by director Xavier Picard, who also contributed to the script.

The laughs come from a combination of slapstick humour and witty repartee, most of which are admittedly tailored more towards adults rather than children. What makes the film stand out most, however, is the enchanting, low-key hand-drawn animation style. The pastel colours and etched landscapes infuse it with more heart and tender loving care than most of Hollywood’s animated output combined. In spite of all the technical advancements, there’s nothing more beautiful than what comes from the hand. If faults needed to be found, then it could be said that the narrative succumbs to a convention on more than one occasion, souring the pleasant taste ever so slightly. The pirate-orientated opening also feels like a silly way to kick-start what becomes a magical trip. The voice cast, as willing as they are, don’t quite fit with their respectively oddball characters. But then, those faults come to mind only when nitpicking over the details. Moomins on the Riviera is, in fact, a sincere, funny, and pretty-as-a-picture delicacy for the Finnish troll family.