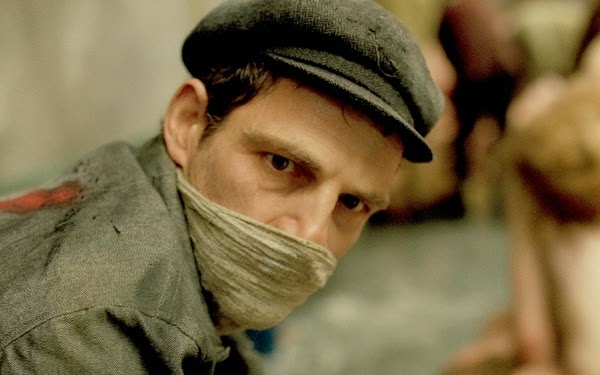 Hungarian director László Nemes’ debut film Son of Saul (2015) is a stunning and aptly horrifying close-up view of the Holocaust and must be a favourite to pick up a prize at the 68th Cannes Film Festival. Géza Röhrig plays Saul, a Sonderkommando: a Jewish prisoner tasked with the dirty job of the death camps. The squads take the new arrivals off the trains into the changing rooms with promises of hot coffee and gainful employment. “We need carpenters, we need handymen,- they yell as they help the prisoners undress and lead them into the showers, after which food is promised. They stand to the side while the screams begin and the long noise of many people dying.

Once done, the men quickly start sorting through the clothes and scavenging for valuables. Then the dirty job of disposing of the bodies – they are referred to throughout as ‘pieces’ – begins. In the midst of this horror, a young boy has miraculously survived the gas chamber. The camp doctor quickly suffocates him and demands an autopsy, but Saul apparently recognises him as his son and must search the camp for a Rabbi who can say the Kaddish and give the boy a decent burial. In the meantime, a plans for a rebellion are taking shape and yet more trains arrive with more pieces to be disposed of. The impossibility of conveying the horror of the Holocaust on screen has been often argued, the death of poetry in the face of such horror accepted as almost a truism, with the documentaries of Claude Lanzmann the exception that proves the rule.

However, Son of Saul is as close as we’re ever likely to get to experience a glimmer of what it was like. Nemes keeps the camera locked on Saul’s face as he traverses the camp on his quixotic/Homeric quest, a father in some way trying to reunite his own sense of selfhood, his role as a human being and yet an absurdly dangerous search for meaning in a meaningless universe. With long takes and a 4:3 ratio, we are forced to confront reality without it ever becoming a spectacle. A lot of the violence and horror is off to the side blurred or conveyed through sound and all the more powerful. Our vision of the world is exactly like that of Saul’s, shrunken down so as to avoid gazing on the horrors, cast down and despairing, but still somehow surviving; still somehow insisting on humanity. Saul’s status as a Sonderkommando means that he lives in The Grey Zone, also the subject of Tim Baker Nelson’s little-seen 2001 film on a similar theme. Saul is the brutalised victim of a regime that forces him participate in the murder.

The Sonderkommandos are relatively well fed and protected from the immediate threat of arbitrary death, but they will all be executed as well after a few months of literally soul destroying work and these prisoners sense that their time is almost up. The rag and bone shop of genocide which the film shows, the nitty-gritty of mass murder, is not the ‘banality of evil’ – this is the squalid, revolting horror of it. This is a vision of Hell on Earth worthy of Bruegel, and Nemes never allows us the consolation of some easy narrative get out, either from the camp or from the horrific moral paradox within which Saul must act. Even the status of Saul’s quest, the morality of it, is called into question by a fellow prisoner: “You’ve betrayed the living to help the dead” and, perhaps, by the audience. And yet his impossible task is his last grasp at being human once more. Son of Saul is not simply a good film, it feels like an urgent and important one, a warning from history.