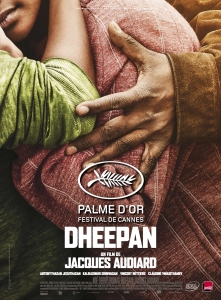 Following the impressive The Beat That My Heart Skipped (2005), the excellent A Prophet (2010) and the melodramatic Rust and Bone (2012), Jacques Audiard returns to Cannes with Dheepan (2015), a mix of Loachian social realism and Death Wish-style violent fantasy. This outsider in Paris tale begins with a Tamil freedom fighter burning the bodies of his dead comrades and throwing his uniform into the fire. Disillusioned with the war he adopts the identity of one of the dead men, Dheepan (Jesuthasan Antonythasan) and, with the help of the smuggler, recruits a young woman to pose as his wife (Kalieaswari Srinivasan) and an orphaned child (Claudine Vinasithamby) to be their daughter. Once in France, Dheepan repeats the script prepared for him with the connivance of a Sri Lankan translator – he was a journalist and freedom fighter and the government tortured him – and secures accommodation in a project-style housing block where he’s to work as a janitor. Dheepan begins his new career assiduously despite the fact that the blocks are run on drug money, with look-outs posted on the rooftops and thugs controlling the foyers of and approaches to the buildings. His ‘daughter’ Illayaal is inserted into the school and wife Yalini finds working caring for a catatonic shut-in who she cooks and cleans for. Her charge is also the uncle of one of the gang leaders, Brahim (Vincent Rottiers).

Sub-plots and possibilities abound: Illayaal finds it difficult to fit in at school, Yalini finds herself attracted to Brahim and Dheepan is contacted by Tamil rebels who insist on continuing the civil war that everyone else – including Dheepan – concedes is over. Will he be dragged back into the violence? Will Yalini find her way? And most importantly, will this faux family begin to feel for each and actually become a family, or will they be torn apart? None of these questions are answered. Our mild-mannered janitor puts himself on a collision course with the gangs, insisting on a no fire zone and recruiting some like-minded residents to help out. However, things turn sour when a turf war suddenly erupts. Illayaal disappears without a trace for the last third of the film – talk about a neglected child – as Audiard narrows his focus to Dheepan, Yalini and a Raid-style assault on the tower block. The entire sequence is filmed with genuine gusto and it’s impossible not to admire the immersive fun of it all, but many will be left bewildered by the jarring tone and wonder just how Dheepan acquired his Neeson-esque set of particular skills.