Brutal, riveting and visually hyperexpressive, writer-director Miroslav Slaboshpitsky’s feature debut The Tribe (2014) achieves new heights of pure cinema – and all without a single word spoken. The viewer shouldn’t be fooled by the opening scene, in which an old woman at a bus stop gives directions to Sergey (Grigory Fasenko), a shy deaf boy: it is the only act of kindness in the film. Upon arriving at a dilapidated state boarding school for the deaf-and-dumb, Sergey is almost immediately induced into “the tribe” of petty thuggery and prostitution run by its alpha male students, abetted by the corrupt woodwork teacher. 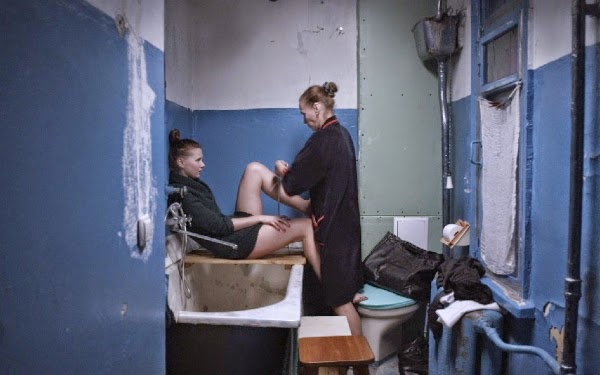 In this harshly hierarchical underworld of crime and punishment, the exploited becomes the exploiter when Sergey must replace the usual pimp at truck stops, then makes the mistake of falling in love with one of the female student-prostitutes. Sergey and Anna’s (Yana Novikova) sexual adventures – often too aesthetically positioned to be plausible – inexorably evokes the full wrath and vengeance of the tribe. Despite a choice cast of non-professional deaf actors and a title card that warns away sign-language translation, The Tribe is far from a silent film. Every footstep and door slam punctuates the unfolding drama; every silence is filled with tension, accompanied by the anticipation of its disruption, whether via a sharp slap or sickening thud. In a back-alley abortion scene, Anna’s crying is the first time she makes a sound.

The film also makes brilliant, ironic use of the fact that its characters can’t hear what the audience does – for example, the warning of the reversing truck that crushes the original boy on pimp duty. The plot is deceptively simple; but paying attention to the actors’ flurried gestures – where a flick of the wrist can substitute dialogue, while adding multi-layered connotations – is not. Such an immersive experience of radical unfamiliarity demands, and richly rewards, the film fan’s unblinking vigilance. However, words become superfluous, as the viewer becomes adept at reading a new language which uses the whole body as its vocabulary. Unique to the personality of the actor, each facial expression and action is charged with attitude and emotion, culminating in a visceral, abrasive physicality that is terrifying in its intensity.

With rigorous, almost painterly composition, Slaboshpitsky highlights the students’ caged rage; alternating between static shots and longer fluid takes of corridors and prison-like dormitories, while retaining a critical camera distance from the action. A particularly striking fight scene begins with a group of boys’ swift march in a straight line, setting the pace for the rumble, whose group choreography comes to resemble physical theatre or ballet. In contemporary Ukraine – a nation without trustworthy authority figures, a people left without a voice, forced to fed for themselves violently – during the shooting of The Tribe, several cast members also participated in local protests and street clashes: reality mirrored in art.