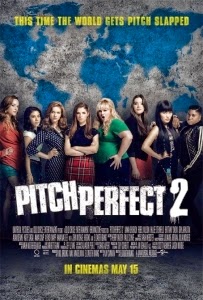 Producer Elizabeth Banks steps behind the camera in this sequel to Pitch Perfect (2012), which comes with decidedly more anticipation than its predecessor. Taking full advantage of studios’ and audiences’ post-Bridesmaids (2011) appetite for female-led comedies, the original film became a surprise hit (the second highest grossing musical comedy of all time) and made stars of both Anna Kendrick and Rebel Wilson. The new film follows Beca (Kendrick), leader of the Barden Bellas, as they attempt to win an international a cappella tournament to regain favour following a suspension from the domestic circuit. Banks smartly sticks with what works: sarcastic humour, more than a dash of slapstick and big songs. 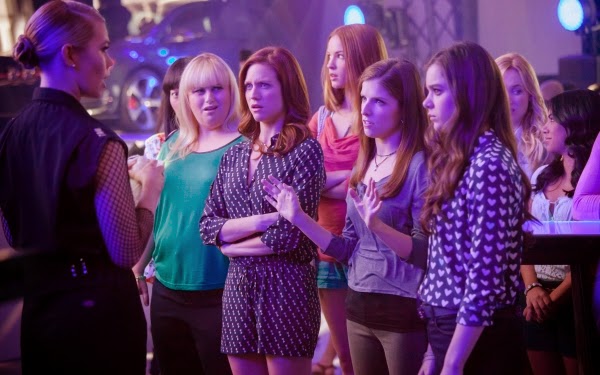 The biggest weakness may be that, like many comedy sequels, it’s apparent that Pitch Perfect 2‘s mission is to bring back a group of crowd-pleasing characters rather than have them go anywhere new. The dry wit and hilarious asides mean this isn’t a deadly blow, as the cast take full advantage of the stage put in front of them, but it becomes clear from very early on in this film that this is about the journey rather than the destination. There’s a loose plot about growing up and moving on, however the sequel has slightly less to say and ends up feeling somewhat lighter than the first. The energy and intelligent dialogue is still there but without the journey towards acceptance that made the backbone of the original, certain narrative diversions (such as The Bellas’ retreat or an underground a cappella battle) feel designed for shenanigans rather than moving things forward.

While this will result in an enjoyable experience for people who loved the original, it also results in certain missed notes – Fat Amy’s romantic storyline with Adam Devine (as former rival Bumper from the first film) falls flat, while the antagonists of the story, a German a cappella group, are broad stereotypes that don’t really affect the plot as they should. The biggest strength is in the Bellas themselves. More confident in their respective roles, Anna Kendrick in particular develops her lead from a prickly outsider to someone slightly more goofy, and by extension a little more likeable. Moments such as her unintentional attraction to the German group’s leader or her interactions with the excellent Keegan-Michael Key (playing Beca’s irate new boss) underlines her comic timing. Similarly, Wilson is in her element as the brash Fat Amy, bringing another game performance that could well have studio execs masterminding her own spin- off. Elsewhere, the characters that are used sparingly are often the most fun. In particular, Banks and John Michael Higgins steal every scene they’re in as the tournament commentators, with improv that would suit a Christopher Guest comedy. The surprisingly abrupt ending underlines the straight forward nature of Pitch Perfect 2, a film which wants nothing more than to bring the gang back. Luckily, that gang has enough talent in it to make for an entertaining couple of hours, however even if the expected big box office is achieved, if Kendrick and co. may be best advised to take their bow while they are still on top.