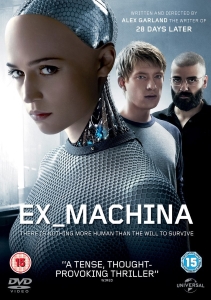 ★★★★☆
The best science fiction serves as a barometer of the times, a tool with which to gauge the concerns of our age. In Ex Machina (2015), the superb directorial debut of genre polymath Alex Garland, our contemporary technological fear is internalised then cast into the future’s void. The consequences of The Age of Information – from Google to Snowden – are taken as given and next steps are considered. It’s a film about human possibilities and digital anxieties, positing technological innovation as an endless cycle. The science changes but the moral narratives stay the same; Garland confronts the technological zeitgeist of our day but considers it well within the tradition of late 20th century sci-fi. 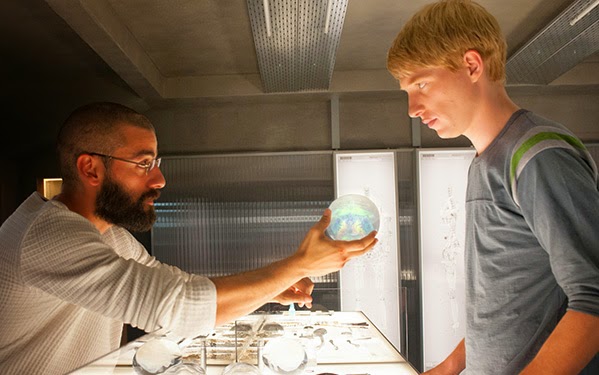 Caleb (Domhnall Gleeson) is a coder for a technology giant who wins a competition to spend a week in the isolated house of the company’s reclusive genius CEO, Nathan (Oscar Isaac), as he experiments with a new form of artificial intelligence – Alicia Vikander’s Ava. Ex Machina is a film invigorated by hypothesis. Each plot turn forms part of a ceaseless discourse between employer and employee about the significance of the developments. Nathan prods and provokes while Caleb offers shifting suppositions; it’s a revealing dialectic that deliberately draws the viewer back to the human psychology behind the technology. These men are polar opposites but they carry the same hubris.
The focus on psychological games played out within a single location gives Garland full control of the material. Ex Machina is dense, but the sophisticated thematic layering is filtered through lean genre forms, making it feel dynamic, propulsive and intellectually nourishing. It is a film concerned at every thematic level with what it means to be human, and the sci-fi elements closely mirror the human drama. In the pursuit of artificial intelligence, both men see consciousness as the technological goal, but they treat it as a scientific absolute, thus ignoring the prickly human implications. If the numerous strands build to a single idea, it’s the notion that the essence of consciousness is in the eye of the beholder.
Garland conflates the anxieties of the digital frontier with male insecurity. Man cannot play God if he is plagued by his own fallibility along the way. These neuroses form part of the complex psychosexual drama at the heart of Ex Machina. Nathan is the alpha and Caleb is the beta, but each is lured to human error through a mistaken belief in the divine right of his sexuality. It is easy to see Nathan’s undoing wrought by his aggressive sexual persona, but Caleb’s pseudo-sensitivity is an equal and opposite patriarchal force. Ex Machina exposes the insecurity of the male ego by showing his lust for creation as simply another strand in the patriarchal power game. The film’s trajectory forms a thrilling, exciting corrective.
Craig Williams | @CraigFilm
Facebook
Twitter
Pinterest
LinkedIn