In American Sniper (2014), Chris Kyle (played by Bradley Cooper) insists on keeping both eyes open when peering through the sights of his rifle. His reasoning is sound; to keep a weather eye on the rest of his surroundings. As director, Clint Eastwood seems to have ignored that advice, instead allowing his protagonist’s telescopic tunnel vision to suck him in. Telling the tale of the US military’s deadliest sniper, one of mainstream cinema’s master purveyors of masculinity and Americana seems to have completely bought into the legend he’s retelling. Despite a delicate handling of Kyle’s internal struggles on home soil, deeper complexity appears to lie just out of frame throughout. 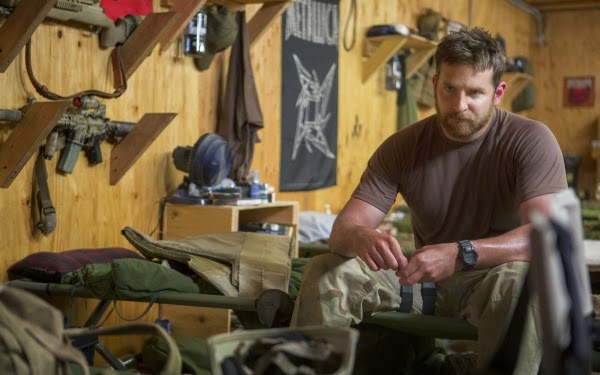 During a conflict it’s understandable that combatants must see the world in black and white. When Cooper’s Kyle first appears on screen, on a Fallujah rooftop, he has a woman and her young son in his cross-hairs. As they approach a convoy of US soldiers, they reveal a hand-grenade and the ensconced marksman has a split-second decision to make – one that must be easier to make, and live with, through the lens of a binary morality. In four tours of Iraq throughout the film’s narrative, Cooper is brilliant in his embodiment of a man who becomes entrenched in a necessary ideology employed as a coping mechanism. In his time stateside, he wrestles with the less high-octane existence of suburban father and husband to his loving wife Taya (another good supporting turn from Sienna Miller).

These sequences work particularly well, and Eastwood is astute in his depiction of post-traumatic stress and how it pushes Kyle back to Iraq time and again. His experiences in the Middle East are peppered with adrenalin-fuelled gunfights and tense sniping. Straining against cinematic warfare are the horrific consequences of the fight, shown through fallen brothers in arms – some killed, others laden with serious wounds. However, for all Eastwood does well, American Sniper‘s major failing is a fatal lack of scope. Kyle’s proper introduction to the audience is through flashbacks that suggest younger years spent in pursuit of a Stetson and steed. Stumbling upon the realisation that the emblematic image of all-American hero, a cowboy, no longer exists, he enlists to protect and serve as a Navy SEAL. Despite an authentic humility that is evident when Kyle is observed with Taya and his kids, this is a man who, to some extent, coveted the legendary status he went on to receive. Yet this is never probed to an adequate degree.
For a swathe of the film, Kyle’s Charlie Company are running around Iraq, kicking doors in and chasing enemies with the insignia of the Marvel’s The Punisher emblazoned upon their uniforms and vehicles. He is a vigilante in the comic book world; of course, one who only dispenses violent justice upon those who’ve done wrong. Somehow, Eastwood’s film fails to engage with the irony of this. Indeed, by the conclusion it has become a sand-swept take on John Carpenter’s Assault on Precinct 13 (1976) – in place of a faceless gang are the ‘savages’ fighting against the US. It’s the soldiers’ wartime term for their foes, but that’s a subtle distinction that is never duly made. Flawed he may be but Kyle and his compatriots are the undoubted heroes of this story, which never seems to stray far enough from the character’s own myopia to give either wider context or any real insight into the man. He was a committed and conflicted soldier, doing one of the jobs in the military with the most inherent moral ambiguity. By failing to expand on his own psyche, all American Sniper does in reality is compound his mythology. Best to go into this one with both eyes open.
Ben Nicholson | @BRNicholson