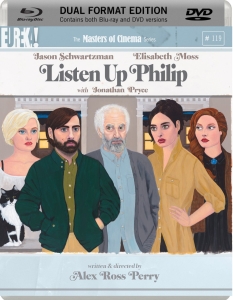 Alex Ross Perry’s Listen Up Philip (2014) follows a self-absorbed writer (Jason Schwartzman) who scuppers his fledgling career through sheer arrogance and misanthropy. It;s both an engaging and a frustrating watch. From the very first scene, Philip is being obnoxious to a former girlfriend who turns up late to their appointment. He berates her for not having believed in him. He’s on the verge of publishing his second novel and is full of himself. Philip is also ghastly to his long- suffering, live-in girlfriend, Ashley (Elisabeth Moss), a successful photographer. He struts around Manhattan telling his publisher he’s not prepared to do a book tour, cancels all interviews and gets up everyone’s nose. 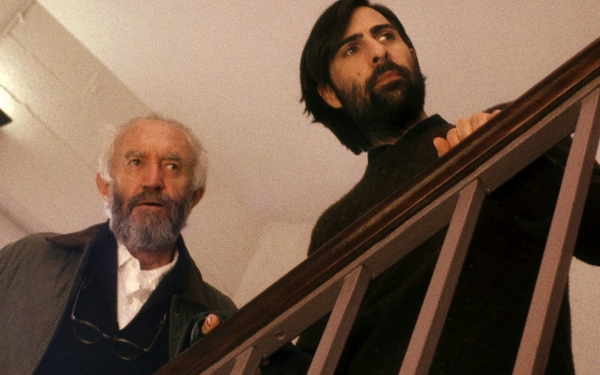 Philip is flattered when he is befriended by fellow writer Ike Zimmerman (Jonathan Pryce), who invites him to write in his holiday house. An egotistical womaniser, Ike seems the worse kind of mentor for Philip. Both men circle around Ike’s beautiful and outspoken daughter Melanie (Krysten Ritter) who is often left disgusted at their behaviour. Later, at Ike’s suggestion, Philip becomes a teacher at a college out of town and takes up with his French colleague, Yvette (Josephine de La Baume). Not surprisingly, given Philip’s ego, the relationship is also short-lived. Perry’s finely-tuned script focuses on character rather than plot and in its the subject and setting there’s more than a hint of Woody Allen.

Perry and DoP Sean Price Williams ensure the audience experience the claustrophobia and restraint Philip feels in the city through the use of a handheld camera. Close-ups on the actors’ faces effectively reveal their inner emotions and frustrations. Listen Up Philip is narrated by Eric Bogosian whose ironic comments summarise Philip’s past (cutting the need for lengthy exposition) and underline our own feelings of exasperation with him. It’s a brave choice to focus on such disagreeable men as Ike and Philip, although Perry offers some respite by spending time with each of his main characters – we watch as Ashley’s career blossoms and she learns to live without Philip (with the help of a cat) and Ike’s and Melanie’s past is revealed during their bitter arguments. In many respects, the narrative unravels more like a novel than a film, but that perhaps is the point. The performances are top notch, particularly Pryce and Schwartzman as the misanthropes and Moss as the neglected girlfriend who forges a new life for herself.