“I don’t like when things are – I can’t believe I’m saying this – so black and white,” laughs Sheila Vand, the doe-eyed star of Ana Lily Amirapour’s stylish and darkly devious feature debut, A Girl Walks Home Alone at Night (2014), released on DVD and Blu-ray this week by StudioCanal. I chuckle as well, not only because we are discussing the moral ambiguity of her protagonist, but also because the entirety of the vampire indie film is incidentally shot in lustrous monochrome. By night, cloaked in a head-to-toe chador, The Girl shadows and preys on the townspeople of Bad City, a fictional underworld that supposedly takes place in modern Iran, but was actually shot near Bakersfield, California – where Amirpour is from – with a cast of all Iranian-American actors.

Despite The Girl’s waifish hipster looks and an offbeat love story involving a local boy named Arash, “she’s a murderer,” Vand is the first to admit. Underscoring this duality in the film, Vand’s long liquid gazes alternately shift back and forth between a kind of vulnerable loneliness and a truly terrifying superhuman hostility. Ironically, Vand also feels a tension between who she really is in real life and her public persona as an actress. Here she chats about her own personal experience in leading a “double life” both on and offscreen, revealing how The Girl’s backstory killing spree, her grandmother, and the Iranian Revolution intersect. 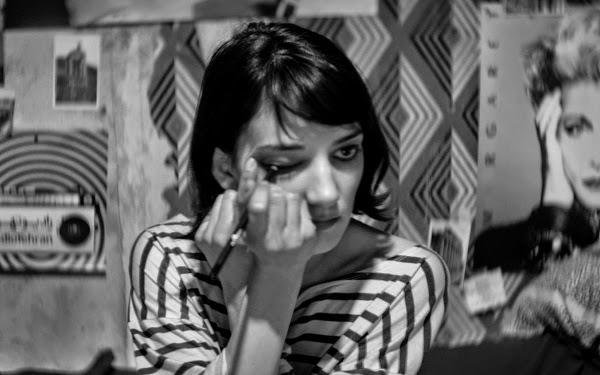 Christine Jun: What was it like working with director Ana Lily Amirpour on this film?

Sheila Vand: I was lucky enough to already know a lot of the cast members as well as Lily, so we had a bit of a shorthand and it was a fun set. It was different because it took place in a surreal world and was a lot more of a precise process than other films I’ve worked on. Each choice was thought through before we got to shooting. There was nothing organic or improvised, it was all meticulously crafted.

CJ: Did you have a hand in helping to create your role of The Girl?

SV: The part was written for me, so I feel like it was molded to who I am. I only got asked to do the project nine months before we started filming, so there were a lot of ongoing conversations with Lily. Because she cared so much about detail, I took the time to ask a lot of questions, did lots of research, and that was one of the most rewarding parts of it.

CJ: Were there any unusual ways in which you prepared yourself to play a vampire?

SV: Lily had the cast and I watch tons of films so we’d be on the same page cinematically. I watched a lot of spaghetti westerns, vampire films, Youtube videos of snakes and cats to get a sense of their physicality, and I read a lot of vampire literature. I also studied my grandmother to get a sense of old age. and of the stillness that you can really only achieve through having seen enough shit in your life, and being around long enough so that you’re desensitised to a lot of it. Even though my grandmother shows a lot of melancholy and numbness, there’s still a vulnerability there, because at the end of the day, because she’s human. It was important to me to get that balance right with The Girl. I never wanted her to feel too human or so unatural that she was no longer real. 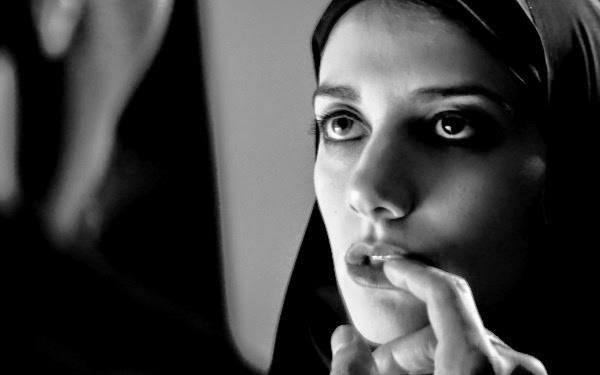 CJ: In the film, The Girl warns Aresh that she’s “done bad things.” Do you consider her an evil force?

SV: Its a fascinating question because so many people have fallen in love with her after watching the film, and its been interesting to know that people can feel so strongly about a killer. She went on a raving killing spree through the seventies and eighties, and now she’s somewhat of a good person with a heart. The film really tries to stay away from judging her morally, leaving it up to the audience, and I really appreciate that. But she’s lived long enough that she’s been allowed to explore different shades of morality. But at the end of the day, she’s a murderer. I always thought of her as someone who’s trapped in her circumstances, and trying to make the best of it. She can’t help the fact that she has to kill, but she can decide who she kills. That’s why she’s ended up in Bad City, because its the dregs of society and if shes going to kill she might as well be do it to bad people. At the same time you can ask, who is she to be the judge of that?

CJ: You mentioned that The Girl went on a killing spree – do you mean that she was involved in the Iranian Revolution? Could you mention a bit more about her backstory?

SV: My thinking was that because there was so much violence already during the Revolution, it was easier for her to get away with killing then. For her, it was more of a logistical than political thing. I think a lot of her loneliness and sadness just comes out of the sheer boredom of being alive for 187 years. Her backstory is that when she was nineteen she was dying from a plague, and a vampire that lived in her village who was always fascinated by her, turned her. He essentially saved her life. From there, she went on this whirlwind adventure with her master, relentlessly killed during the Iranian revolution, and then actually wanted to die after that era, but couldn’t force herself to do it. She’s lived many lives. Lily has been filling in more details with her graphic novels, of which I think two are already out.

CJ: As viewers, its a delightful shock to notice how stylish The Girl is once she sheds her chador, as well as the richness of her private life at home. Do you think most young Iranian women today identify with that double-life?

SV: As far as the double life thing goes, I’m a bit of a loner myself, but I’m in this strange business where I have a public persona, so I do identify with that part of her that is viewed as one thing when who she really is is another. As far as other Iranian women connecting to it, we’re still discovering that as the movie is released abroad. But so far the response has been amazing and a lot of girls have told me that they find it very empowering, the fact that The Girl lives by her own rules.

CJ: Do you consider the film a feminist revenge fantasy, with you as an avenging angel protecting abused women?

SV: The film has done such a great job of transcending categories that I would hate to label it, but I think anyone’s interpretation is valid, and the feminist view has been a very popular one. I definitely see how all of those elements exist within the movie.

CJ: This film is unique in that isn’t just a straightforward Iranian horror or American western film, but a hybrid. Do you think there will be a difference in how its received in different countries?

SV: There will probably be a generational divide. The film has a lot of contemporary qualities so that I can see it being more appealing to young people, but there’s also something timeless and classic about it. I’m also curious about how Iranians living in non-Western parts of the world think about the film, because there’s something very iconically American about it. Since Iranians now exist more in diaspora than the mother country, there’s this strange identity that forms when so many people from one culture have been displaced. I love that this movie has a hybrid cultural identity, because I have that, and I’ve never felt like my unique hyphenated ethnicity has been represented. I think a lot of ‘hyphenated’ Iranians feel the same way. I was never fully American and never fully Iranian, so Bad City became the place that I felt like I belonged. I belong more to the world of this movie than the real world.

CJ: What’s next for you?

SV: I just wrapped up a film with Tina Fey, Margot Robbie, and Martin Freeman that I’m very excited about – it’ll be a nice change of pace to do some comedy.

Ana Lily Amirapour’s A Girl Walks Home Alone at Night is out now on DVD and Blu-ray. Read our review here.