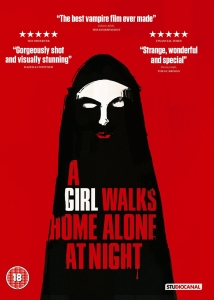 It’s easy to mistake Ana Lily Armirpour’s A Girl Walks Home Alone at Night (2014) as purely a mash-up of spaghetti western, horror and neo-noir – until a sign appears in Farsi, accompanied by a pile of dead bodies inexplicably dumped in a nearby gulch. In this subversive Iranian vampire flick, the appropriation of pop culture is perfectly suited to Bad City, a disquieting East-meets-West netherworld painted in high contrast monochrome. Though possibly a stand-in for Tehran, it feels more like a dark corner of Armirapour’s imagination: both timeless and eerily contemporary. The vampire (Sheila Vand) stalks lowlifes at night on her skateboard like a bad conscience, her chador billowing behind her like a cape. 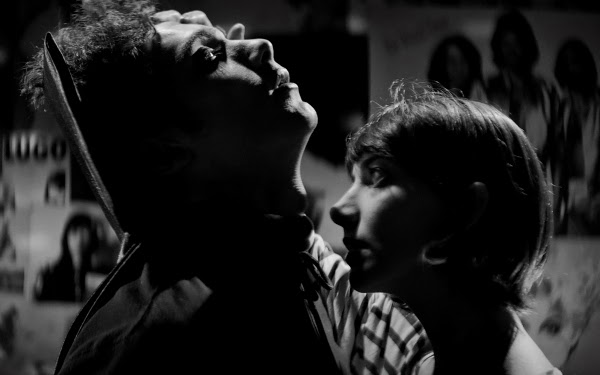 Despite The Girl’s sweet fang for abusive men, the oppressive angst of the townspeople in A Girl Walks Home Alone at Night is mostly due to a cycle of mutual exploitation. The James Dean-like Arash (Arash Morandi) is forced to work as a gardener for a spoiled socialite in order to fund the habits of his junkie father; a weary prostitute (Mozhan Marno) is cheated of her pay by the sadistic pimp Saeed (Dominic Rains), who also ends up seizing Aresh’s prize ’57 Thunderbird as debt collateral. They feed off of one another’s desperate desires as regularly as the oil rigs pumping in the background. Playing with preconceptions of the predatory title, The Girl is pointedly not the film’s victim, but its self-empowered vigilante.

After following Saeed home to his pimped-out pad, she fellates his finger before snapping it off and wiping his mouth with it in a grotesquely satisfying role reversal of sexual objectification. But beyond a critique of Sharia law, Western decadence, or even gender politics, Amirpour is more interested in telling a tender, offbeat love story between two social misfits. While on the prowl, The Girl bumps into Aresh, hilariously dressed as her twin in a Dracula costume. Ironically, its his traditionally chaste attitude towards women – which earlier, the girls at the club sneer at – that wins her over. “I’m bad,” The Girl warns him, but he’s too high on ecstasy to care.

When she sheds her chador in her hipster den and starts gyrating to 80s Euro pop on vinyl, Aresh and the audience are wonderfully surprised by the sight of her chic bob and Breton shirt (seemingly stolen from Jean Seberg) in contrast to the bland, barren street life outside. She may be a murderous vamp, but, man, has she got style. Amirpour clearly privileges emotion and expression over dialogue, as the romantic tryst plays out against David Lynch-esque industrial rumbling and the veloured night cinematography of Lyle Vincent. The magic of her erotically languid, extended takes more than compensate for the film’s occasional slack pacing. A Girl Walks Home Alone at Night rewards those viewers who are willing to abandon all cinematic preconceptions – and like the plucky pair – risk the unknown road.