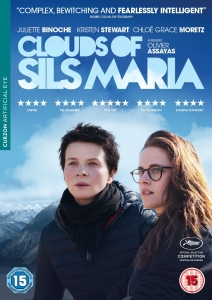 Youth, beauty and mortality are potent themes in Olivier Assayas’ latest feature Clouds of Sils Maria (2014), starring Juliette Binoche and Kristen Stewart. Binoche plays Maria Enders, a middle-aged actress who remains at the top of her game but is assailed by doubts about her career and which direction to take. The film opens on a train. Valentine (Stewart), Maria’s assistant, is taking numerous calls on behalf of her boss. These include calls about Maria’s impending divorce as well as offers of new projects in both film and theatre. It’s soon obvious that Val fulfils a number of roles for Maria including secretary, protector and confidante. 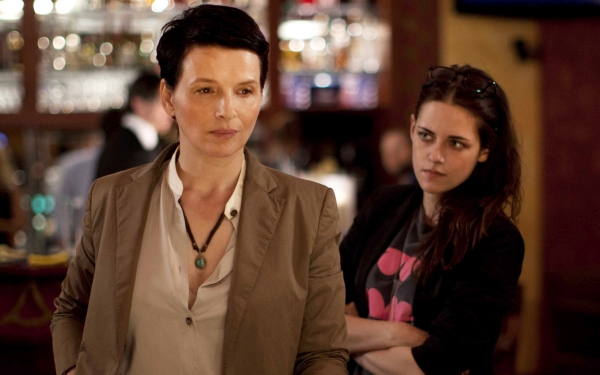 The pair are on the way to a prize giving in Zurich for Wilhelm Melchior, the director who helped make Maria’s name. En route, they learn that Wilhelm has died. Maria’s acceptance speech on behalf of Wilhelm becomes a tribute. Once in Zurich, still mourning the loss of her friend and mentor, Maria finds herself accepting a part in a revival of Wilhelm’s play Majola Snake. Previously she had played an ingénue, Sigrid, the part that launched her career. The problem is the role now on offer is that of the older, sadder character, Helena, a lesbian in love with her tear away protégé. Maria has considerable problems coming to terms with this shift in focus (from beloved to lover).

Much of Assayas’ film hinges on Maria’s reluctance to play an older character, to relinquish the part of Sigrid, and the power she holds over Helena, to a younger American actress, Jo-Ann Ellis (Chloë Grace Moretz). Jo-Ann is young, impulsive and used to being the centre of attention. She is also undeniably talented and has her fans, Val among them, who respect her integrity and intensity as an actress, even if her most major role to date has been in sci-fi, a genre Maria looks down on. At first, Maria is scornful of Jo-Ann’s lack of depth and choice of roles. However, following their first meeting, where Jo-Ann remorselessly flatters her, Maria decides to reserve her judgement until rehearsals are underway. Val, meanwhile, is re-examining her relationship with her boss and finds herself rapidly tiring of Maria’s outspokenness and her own opinions being brushed aside. When they move into Wilhelm’s home in Sils Maria so that Maria can learn her lines, the various tensions between them reach crisis point. It’s the intensity of their relationship that comes closest to life imitating art. Assayas further underlines this meta-textuality by casting world-renowned Binoche, still gorgeous but lacking the bloom and carelessness of youth, and two younger stars, Stewart and Moretz, still yet to establish themselves as serious actresses. Clouds of Sils Maria goes some way towards reflecting and addressing this imbalance.