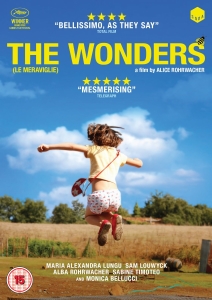 Casting a peculiar spell over its audience, The Wonders (2014) is a rural ghost story masquerading as a coming-of-age tale. Unfolding like a morbid reverie for a bygone era, Alice Rohrwacher’s follow up to 2011’s Corpo Celeste reverberates with the strange frisson of a world pining for a reality that never existed in the first place. Rohrwacher’s haunting evocation of childhood memory fluidly shifts between realism and make-believe as if they were part of the same continuum. We observe the world via Gelsomina (a remarkably stoic performance by Maria Alexandra Lungo) as she works alongside her father Wolfgang (Sam Louwyck) producing honey on their family farm in central Italy. 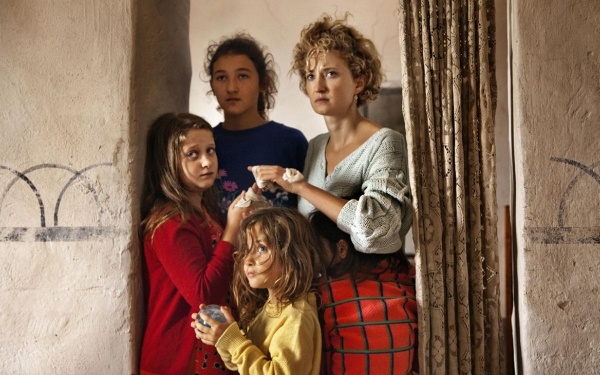 Gelsomina is the oldest of Wolfgang’s daughters and helps him tend to the bees while his wife (Alba Rohrwacher) manages the household. One day, after toiling amongst the hives, the family discover a reality TV crew working in the forest. Draped in an elaborate white shroud, the show’s host (Monica Bellucci) is recording an advert calling for local farmers to enter a contest entitled ‘Countryside Wonders’. Gelsomina becomes enraptured by the scintillating possibility of a life away from the monotony of her rural existence and tries to convince her family to enter the contest, before deceiving her reluctant father and signing them up in secret. Having grown up on an apiary with her German father, it would be easy to assume The Wonders is an autobiographical film about Rohrwacher‘s own childhood.

However, the romanticism for a pre-consumerist life is far too philosophical to be simple biography. The beehive is a well-worn metaphor for rigid societal structures and, not unlike Victor Erice’s Spirit of the Beehive (1973), the film takes place at the intersection of realism and imagination of an adolescent mind trying to make sense of the world. At one point a batch of bees dies due to a chemical product used by a neighbouring farmer who’s far more interested in attracting tourists. The farmer’s business acumen sees him win ‘Countryside Wonders’ as it becomes increasingly clear Gelsomina and her family are falling behind the curve, left behind as the world marches forward, bound like ghosts to a land that has lost its relevance. Shot with introspective precision, but filtered through the porous membrane of a dream, the naturalistic camerawork and weather worn colour palette of Hélène Louvart’s cinematography beautifully articulates the estrangement Gelsomina’s family feels towards the land.

Elements of the family’s life are almost as fantastic as the TV show they appear on (itself a vulgar celebration of the region’s Etruscan past) with Wolfgang often sleeping outdoors on an uncovered mattress. His purchase of a camel for Gelsomina is just one of the film’s opaque side notes that suggests we’re being lead by an unreliable narrator. Using Super-16 film stock to capture this dying way of life, The Wonders crackles with the fading whimpers of a bygone age, caught in a distorted memory where myth and tradition have been merged to form a counterfeit image of history. Magic overwhelms everything, even time, with characters inhabiting an ageless dominion that only enhances the theory they’re haunting this dilapidated farmhouse. A richly shot and impressively acted portrait of a rapidly disappearing way of life The Wonders is a lyrical work of timeless beauty that exposes the myths behind our collective nostalgia for the past.