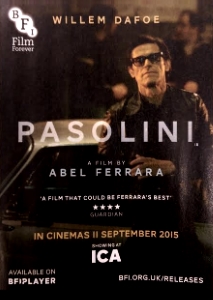 Pasolini (2014) is another key work in Abel Ferrara’s terrific late master period. A biopic of the final days of Italian polymath Pier Paolo Pasolini (played by Willem Defoe), it operates as a diptych with the director’s previous film, Welcome to New York (2014). Both pictures deal with titans struggling to dictate the course of their own narratives but, where the latter features a man whose destructive behaviour is an expression of the privilege afforded by his position, Pasolini is about a man constructing something in a world geared against him. Ferrara’s Pasolini is a man defined by opposition; every gesture is an act of violence against a state rotting from within. 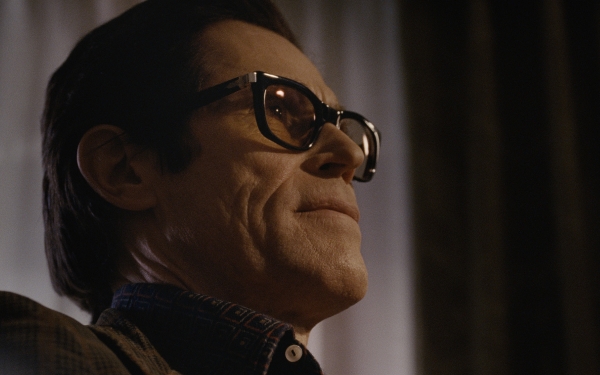 The temporal specificity is essential to the central thesis of the piece. Pasolini has finished what would be his final film – the infamous Salo, or the 120 Days of Sodom (1975) – and finds himself waging battles on every front, both physical and metaphysical. Thematically, one could think of this as Pasolini: Between Salo and Death. The Italian’s work and life have intertwined, becoming a necessary force. “I work my violence,” he says, dressed in black, like Italy’s angel of death; a harbinger of doom tuned in to the tenor of the times. There is talk of a “preamble of a testament”; Ferrara has made many versions of his Revelations but, here, he unselfishly gives voice to Pasolini’s.

Late period Ferrara films are strictly low-budget, digital affairs, but there’s always a purposefulness to the rough aesthetics. There’s no grain in the image – devoid of the baggage of classicism, the director’s post-New Rose Hotel (1998) work is propelled by immediacy, but defined by its engagement with art, crisis and the soul of man. The Roman skies of Pasolini are black; a threat of an encroaching storm which never arrives. The protagonist is on the precipice of a crumbling European empire. Italian politics is its own hermetic kingdom; an endless procession of pomp and ritual. Pasolini himself is on the margins, urging it to fall. While a certain amount of knowledge is assumed on Ferrara’s part, he helps build an image of Pasolini’s burden through references to the novel he is writing as well as through more traditional flashbacks. The cumulative effect is that of lives within lives, works within works. The key to the picture is found in one of Pasolini’s bon mots. “Mine is not a tale, it is a parable. The meaning of this parable is the relation of an author to the form he creates.” It brings us back, like all of Ferrara’s films about artists, to the director himself. The film is a reflector of both men’s processes.