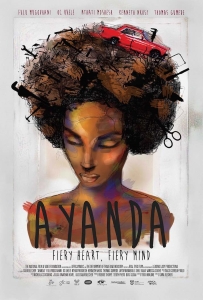 Blurring the lines between documentary and fiction, South African director Sara Blecher’s Ayanda (2015) is, on the one hand, an energetic and intimate tale of one woman’s plight to save her family garage business. This personal thread serves as the cornerstone of a broader portrait of the whole continent by fictional photojournalist ‘The Expressionist’ (Minenhle Nqaba Shazi), his moral and social insider’s point of view seeking to highlight what it means to be African outside of the (Western) misconceptions of war, famine and strife. 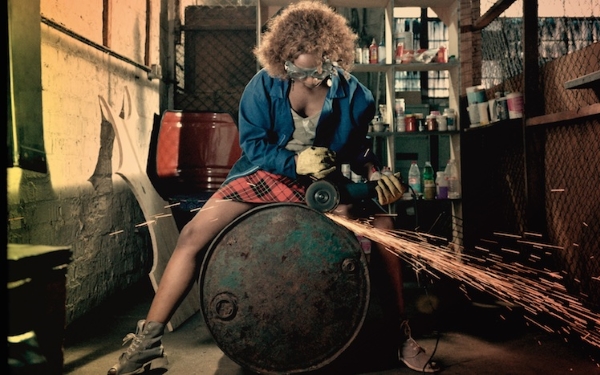 It’s shame, then, that what is an engaging and worthwhile premise falls short on both the emotional and semi-political aspects of the story. By leaving a foot rather tentatively in each camp, Ayanda achieves neither catharsis on the character level nor a definitive take-away message on the social. Although it may plateau a little, there is still a lot of good to be said about the film, including a strong turn by a dazzling leading lady (Fulu Mugovhani), its rich setting and a script that flickers between English and Zulu from one word to next.

Raising questions of cultural identity, Blecher sets Ayanda in the microcosmic Yeoville, a colourful and vibrant melting pot suburb of Johannesburg whose streets bustle throughout with migrants from all over Africa. It’s the face of the eponymous Ayanda which fills the screen at the outset, her bright eyes and exuberance shining through immediately. An artist by trade, she brings old barrels and car parts back to life with plenty of material on hand in her deceased father’s garage. Yet to accept his passing – eight years previously – Ayanda struggles to rescue an ill- fated business along with mechanics David (OC Ukeje) and Zoum (Thomas Gumede) in the face of opposition by her mother, Dorothy (Nthati Moshesh) and family friend, ‘Uncle’ Zama (Kenneth Nkosi), the former wanting to sell the garage to put the past behind them, the latter to pay his way out of jail after a shady business deal goes pear- shaped. As in the opening moments, each character is granted an opportunity at direct address in interview sequences drained of colour and squashed into a much squarer aspect ratio, distinguishing them as more realist than the main body of action. They add one-on-one insight and lend Ayanda its docudrama feel.

This is reinforced by frequent collages of photographs and even narrower portrait shots that punctuate the snappy editing of the freewheeling narrative that follows Ayanda’s progress. Yet further storytelling techniques include instances of stop motion as well as a clock and daily countdown to an all-important car auction etched in white on top of the film stock, adding a further layer to the visual scrapbook journey. Far from feeling scrappy, it reflects the creativity of the determined Ayanda and adds to the lively and artistic tone of the piece. Mugovhani is the real stand out here, a bubbly personality who has unquestioning faith in her own ability, both as character and a watchable on-screen presence. She is supported well by Ukeje as mechanic and love interest David, a principled and likeable chap who more effectively demonstrates the kindly principle of “Ubuntu”, which is lacking in his driven lady friend. Ayanda may be part family drama, part cultural study, not giving either the time or attention needed to fully achieve its aims, but its big heart and soul is in the right place and that makes it well worth a watch.