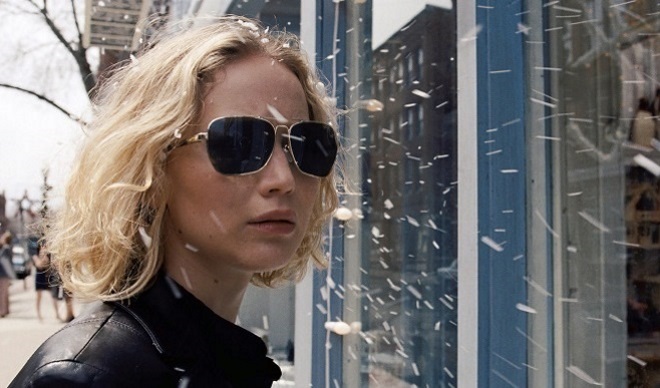 Reinvention and familial turmoil have long been hallmarks of David O. Russell’s particular brand of knockabout cinema and his latest collaboration with Jennifer Lawrence and Bradley Cooper, Joy (2015), is a wonderful fairytale marriage of the two. It’s a banana flambé with extra rum that brazenly throws together folksy storytelling, arch soap opera melodrama and a typically eccentric cast into a golden Hollywood crack at the American Dream. “I don’t need a prince,” declares the young protagonist (Isabella Crovetti-Cramp) before J-Law takes over leading lady duties and carries the fortunes of on-screen and off-screen families on her increasingly charismatic shoulders.

As is so often the case, Russell pulls together a rag-tag band of recognisable faces into his erratic and entertaining ensemble but, as the title suggests, this is one woman’s film. From the pristine childhood fantasy of a self-constructed future made from white paper, Joy finds herself in her mid-twenties with no prospects, two kids, and a crackpot family all depending on her elbow grease. Lawrence excels from the roaming opening scene in which she must corral her stay-at-home mother (Virginia Madsen), recently dumped father (Robert De Niro), deadbeat ex-husband (Édgar Ramírez) and her loving grandmother (Diane Ladd) as well her nippers. Joy may not quite have the spike of some of the actress’ more celebrated roles, but she has just the right brew of steely grit and twinkling charm. For a film with a central narrative so earnest as this one to work, the audience has to invest in the protagonist and with Lawrence as co-pilot, Russell has no trouble in assuring that.
The filmmaker is not the only one in need of investment, though. Joy herself has found a possible route out of her personal hole; housework ironically coming to her aid after years of toil via her canny invention of the Miracle Mop. Getting it into production, and subsequently into homes is where the drama lies. A partly fictionalised tale woven around the real life of Joy Mangano, the narrative lurches back and forth through time to fill in Joy’s history and allude to future successes. It’s a stylistic decision that seems at odds with the films more classic foundations, but helps to inject some of the tempestuous energy of script into the wider 35mm aesthetic.
The film also has some encouraging things to say about relationships, with Joy’s most steadfast support coming from the people that she chooses to surround herself with rather than those she is obliged to. Ramírez and Dascha Polanco are both great as ex, Charlie, and best friend, Jackie, respectively – the two people who actually turn out to be eternally reliable – while Cooper provides further ample reinforcement as QVC boss, Neil. Flying in the face of typical portrayals of slimy businessmen and bitter exes, they add weight to the positive presentation of Joy’s own judgement and social savvy. Their loyalty only amplifies the viewers’ own desire for the triumph of this ‘driven woman’ – most keenly felt in a fantastic The Godfather-esque scene at the denouement. Though not as finely tuned as Silver Linings Playbook or American Hustle, Joy might just be the raggedy underdog that trumps them both.
Ben Nicholson | @BRNicholson
Facebook
Twitter
Pinterest
LinkedIn
Go to mobile version