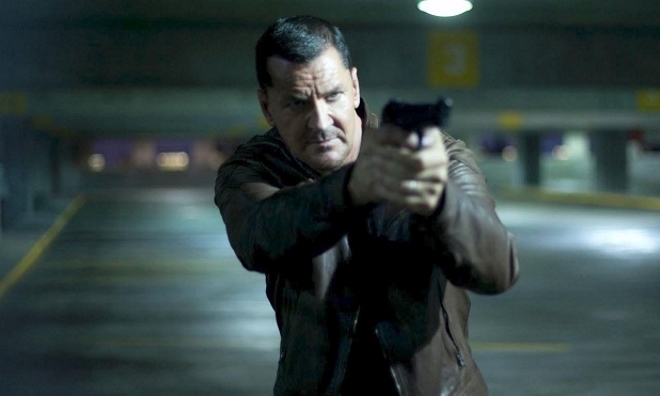 How many Fairbrasses does it take to knock together another hard-hitting, foul-mouthed, blood- splattered British crime movie? In the case of Jonnie Malachi’s Breakdown the answer is three. Man mountain and former Eastender Craig stars as Alfie Jennings, a vicious hitman who, predictably, is on the verge of a mental breakdown and wants out of the game. Sons Jack and Luke are credited with production duties. The bland poster tagline – “They all have to die” – suggests that a number of the cast won’t make it to the closing credits and that much does prove to be true.

Although Breakdown does almost exactly what it says on the tin, Malachi chances his hand a little by straying just outside conventional norms here. Like its battle weary hero, amid the assassinations, scenes of brutal torture and fruity language there is the suggestion of a heart and soul to accompany the fragility of our heroic lead. They’re just buried beneath several inches of muscle. Having also penned the script for what is his debut directorial feature, Malachi keeps the storyline as much a family affair as its production. A ruthless killer with a newly troubled conscience, Alfie is gripped in the throes of anxiety attacks brought on by hallucinations of unfortunate souls who departed this world at his monstrous hands; this clouded state of mind reflected by a frequently employed blurred lens.

A perennially moustachioed James Cosmo plays boss man Uncle Albert; the veteran actor bringing as much gravitas as a clunky script will permit his wannabe aristocrat who possesses an unhealthy penchant for taxidermy. “We must always take care of the things we love the most,” he malevolently advises Alfie and daughter Maya (Amanda Wass). Suffering an unwanted episode when liberating a Turkish man of multiple fingers with a cigar slicer, Alfie fears his next work performance review may be less than positive. With a furrowed brow, plenty of staring moodily into the middle distance and ferocious physicality, he channels his inner Liam Neeson in an effort to protect wife (Olivia Grant) and daughter from a less than forgiving professional family.

Alfie’s admittance to mental fragility comes across a little like a grizzly bear converting to vegetarianism but despite his imposing physique there is something of a gentle giant about Fairbrass’ character, especially in the tenderness with which he treats the women in his life. While there is a great deal of violence on display, its inclusion is intermittent enough that it retains a suitable shock value. The complete absence of police at any point given the body count, as well as Alfie’s nonchalance when walking around in broad daylight covered in blood, is problematic to say the very least. Theirs is an insular underworld where vengeance and retribution come from within but unfortunately this undoes any sense of reality the director sought elsewhere. Malachi’s film is not one for the ages, sadly. Indeed Breakdown doesn’t do enough to distinguish itself from an overcrowded canon of distinctly average British film.