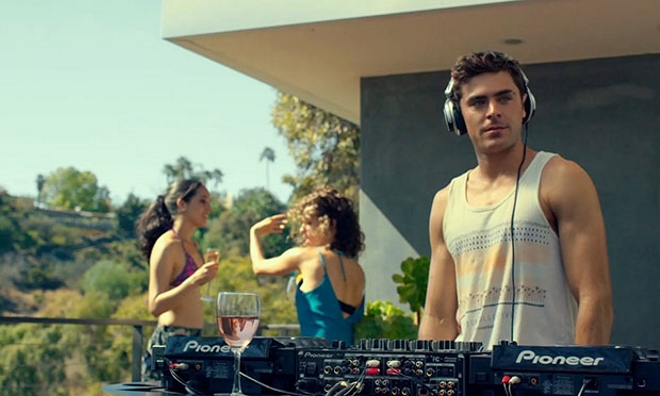 Cole (Zac Efron) keeps a poster of Al Pacino in Scarface on a wall in his San Fernando Valley bungalow, a pad he shares with his bros. Ever since Brian De Palma’s 1983 gangster flick emerged with renewed vigour in the early 21st century, as a figure of cultural inspiration, Tony Montana has become the patron saint of the American Dream. Only, Cole sees a flaw in the poster’s motto – “The World is Yours” – and it chides with his egalitarian bro-spirit. He crosses out the Y, so that it reads ‘The World is Ours.’

Max Joseph’s airbrushed rehash of the old ‘I’m gonna be a great big shining star’ narrative borrows heavily, whether it is aware or not, from John Badham’s classic, Saturday Night Fever. It’s the story of a blue collar dreamer who hangs out with losers and must leave them behind, if he’s to reach his potential as the new superstar DJ on the Ibiza block. In We Are Your Friends (2014), the SNF role of Stephanie (Karen Lynn Gorney) is swapped with Wes Bentley’s older, wiser and more coked up James, a hip and famous pancake turner. James sees potential in Cole but the guy doesn’t pay attention and can’t stop making eyes at James’s assistant (Emily Ratajkowski), who he romances and ditches to reunite with James – proving We Are Your Friends ought to have been retitled Bros Before Hoes: The Movie.
Just as Tony Manero (John Travolta) and Stephanie reunite for a touching and slightly transgressive final scene (he attempted to rape her in the back of a car), Cole and James put the past behind them in a way that, much like the rest of the narrative and plotting, rings false and outs Cole as a Montana fanboy all along. Director Joseph feeds his movie with all the MTV flash and counter-cinema techniques he can muster. Fourth walls are torn down and when Cole has his joint spiked with PCP by James (what a great guy) there is a misjudged animated sequence and a painting that comes to life.

Zac Efron has put his trust in some ropey material but there is no denying his star quality. Playing a dude-bro dreaming of the big time, however, doesn’t suit him at all. He’s a likeable and charming screen presence but he’s just wrong for this particular role. John Travolta’s charisma and raw energy as Manero, as well as his slick dance moves, drew us in and kept us compelled even as he acts like a preening narcissistic gobshite and almost-rapist. There is no such complexity to Efron’s performance. Cole is blander than a cheaply made night-time infomercial. Set next to Mia Hansen-Løve’s vastly superior and authentic Eden, We Are Your Friends is The Birdie Song juxtaposed with Daft Punk’s One More Time.