Film Review: ‘Night at the Museum: Secret of the Tomb’ 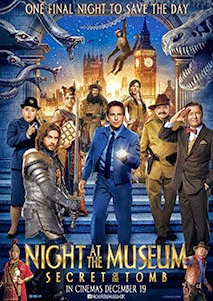 There was an effortless charm to the original Night at the Museum (2006) that made it more than passable family fare, albeit of the silliest order. Two films later and the franchise has well and truly passed its sell-by date. Night at the Museum: Secret of the Tomb (2014) exists and contains one or two brief moments of verve, but it’s mostly predictable swill delivered by actors merely seeing out their contracts. Larry (Ben Stiller) is now in charge of dazzling audiences at the Museum of Natural History in New York City who believe that the exhibits coming to life are a result of special effects rather than the powers of an ancient tablet. 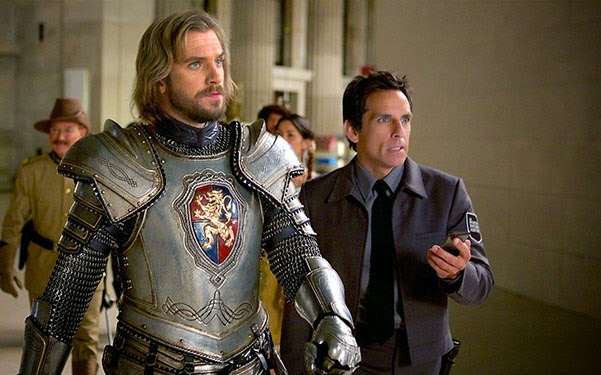 But when that tablet runs out of steam, Larry has to venture over to London with some familiar faces in tow – Teddy Roosevelt (Robin Williams), Octavious (Steve Coogan) and Jedediah (Owen Wilson), et al – to set things right. Looped around a paper-thin narrative that makes hardly any sense, Secret of the Tomb displays signs of fatigue right from the start. Not only are a large proportion of the gags repetitive, but they’re also delivered by actors who are simply phoning it in (Rebel Wilson plays a night watch guard at the British Museum, barely mustering the energy to even try to be funny). It’s only the newcomers – Dan Stevens as Sir Lancelot and Ben Kingsley as Merenkahre, the pharaoh who created the tablet in the first place – who warrant interest.

The screenwriters desperately try to make the audience believe they care about these characters in a way that audiences cared about the toys in the Toy Story films. A whole subplot centres on Larry’s relationship with his son (Skyler Gisondo), but the simple truth is that these characters have never been more that faces, so the ham-fisted attempts at carving out moments of sentiment fall flat almost immediately. There are, of course, elements of the film that do work, such as two inspired set pieces. One involves Octavious and Jedediah reenacting Pompeii in miniature form, while the other sees Larry and Teddy entering M.C. Escher’s famous Relativity lithograph to claim the tablet back from Lancelot. It would also be hard to argue that this being Robin Williams’s last screen performance doesn’t add a certain level of poignancy – indeed it would simply be a lie – but it’d be inexcusable to overlook Secret of the Tomb‘s many, many shortcomings because of this, and this alone.