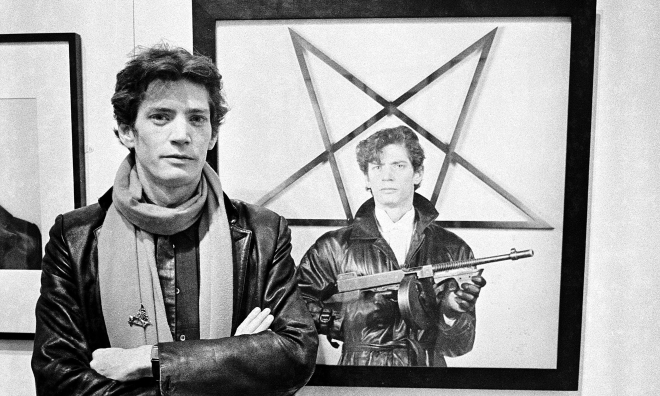 “You can do it as a hobby, but what are you ever going to do with art?” This was the attitude of Robert Mapplethorpe’s father, Harry, who never understood the desire of his mischievous, provocative artistically-inclined son. Robert would go on to become famous for his stylish black and white photography, often challenging in their brazen explicit sexuality. “Look at the pictures” chants an outraged senator spitting flames about this “known homosexual” during a public trail that appears as a bookend to Mapplethorpe: Look at the Pictures. Filmmakers Fenton Bailey and Randy Barbato (Inside Deep Throat) are keen for you to do just that in this candid and absorbing documentary.

The intention is to present the photographer’s work to the audience and allow them to decide for themselves whether they buy into his combative aesthetic, or whether they agree with the grumblings of conservative offence; that it’s “ugly, degrading, obscene” and isn’t art. Even those providing commentary are conflicted, with two models suggesting his compositions had no hidden philosophical musings while others saw in his imagery the push and pull of God and the devil. Mapplethorpe himself say that he wants “to see the devil in all of us.” Either way, his work is incredibly striking. For all of the vulgarity, the film takes its own fetishistic thrills in Mapplethorpe and the act of creation than the laid bare subjects.

Mapplethorpe never shies away from the pornography, but the camera lingers equally on a curator snapping on a rubber glove as she handles a Polaroid exhibition invitation – a picture of Mapplethorpe’s penis – or his membership card for the grimy Mine Shaft club where he found lovers and models. Elsewhere the clicks, whirs and abstracted close-ups of cameras accompany the brisk editing that keep the parade of photos from veering towards a flashy PowerPoint presentation. This is aided by interspersing the stills with archival footage, audio from recorded conversations and talking heads with various people that knew him well – from siblings to lovers to models to admirers – who provide ample opportunity for humorous anecdotes as well as reflection on his voracious ambition and vanity.

An upcoming retrospective of his work at Getty and LACMA act as a jumping off point for what is ultimately a chronological retelling of Mapplethorpe’s story, but it gives an immediate indication of his lasting appeal that is emphasised by subsequent footage from auctions and the court case which followed his death from AIDS in 1989. His artistic merit is a subjective thing, of course, but Mapplethorpe recounts the fascinating story of the artist while allowing his work to speak – and pop eyes – for itself.