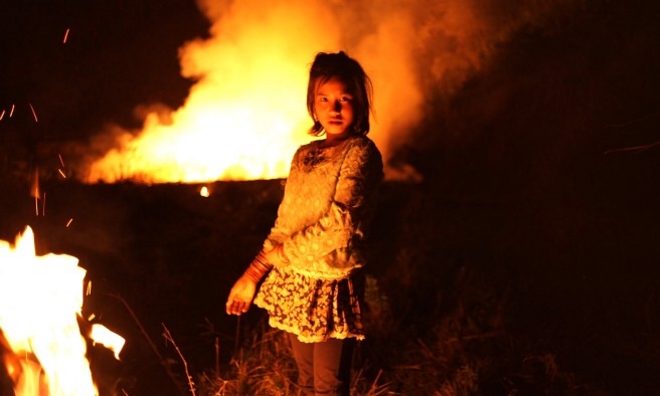 When history is violently forced from its intended path by the outbreak of war, it’s society’s poorest and neglected who suffer most. Ta’ang, the latest film from documentarian Wang Bing, focuses on the lives of the numerous refugees living on the border between Myanmar and China. The Ta’ang (also known as the Palaung) are from Myanmar’s Kokang region and have been displaced by civil war. At a time when migration has dominated the news in Europe, Wang forcibly reminds us that there similar tragedies continue to occur across the globe. Ta’ang opens on a makeshift tarpaulin hut, with a man dressed head-to-toe in camouflage kicking a woman as she cradles her child.

This is the only time Wang depicts the violence that foreshadows the lives of his subjects, yet even though such scenes are absent the war that rages in the background is inescapable. A renowned chronicler of marginalised Chinese lives; Wang constructs his films by studying how his subjects interact with their surroundings and, over time, how their surroundings begin to effect their lives. It’s mostly women and children who have fled across the border and Wang accompanies them as they wander the remote mountain trails, living in makeshift accommodation in overcrowded refugee camps while trying to make some extra yuan by working in the sugarcane fields. The roar of artillery can be heard in the background, a hailstorm of fire and bullets that threatens to sweep over the Ta’ang the moment the wind changes course. However, there’s far deeper value in the campfire conversations of these refugees as they discuss the journeys they’ve undertaken, the hardships they’ve experience and those they’ve had to leave behind. These moments are tenderly captured using only natural light in an unhurried and sympathetic fashion that has become a trademark of the director’s oeuvre.

Best known for his 551 minute portrait of China’s industrial landscape, West of the Tracks, at only two-and-a-half hours Ta’ang feels relatively brisk. However, the repetition of daily life still manages to create a timeless zone, and it’s only when time becomes unquantifiable that life begins to emerge. Wang understands that the only way to understand what his subjects are enduring is to enter wholly into their suffering, with the film’s protracted observations of the everyday trials of these women slowly adopting a high meaning. Locating the humane in the inhuman and allowing the audience to locate themselves within that space, Ta’ang doesn’t try to analyse the war, or explain the intricacies of the conflict, instead it brings us closer to the lives of those so often forgotten in the reporting of such atrocities.