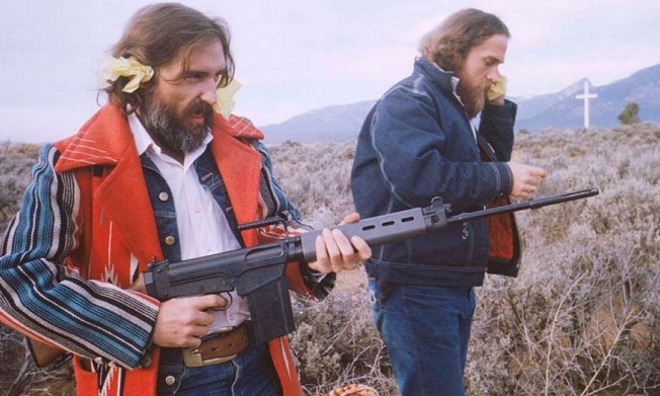 ★★★☆☆
Lawrence Schiller and L.M. Kit Carson could hardly have better timed their thirty-day intersection with Dennis Hopper that formed the raw materials of the quasi-documentary The American Dreamer. They caught Hopper fresh from Easy Rider when he was a generational icon, high on his success – and just plain high – and boldly attempting to establish a reputation as a serious filmmaker. The film was shot and edited in early 1971, in the eye of the New Hollywood storm, but never received a release beyond as companion piece to Hopper’s Easy Rider follow-up The Last Picture.

At the request of the actor, The American Dreamer was subsequently shown only to students before Schiller donated it to an art centre in Minneapolis several years ago. It has now undergone a restoration and receives a theatrical bow so that audiences can take their own glimpse into this definitive moment, luxuriating in the equally profound and nonsensical monologues that the enigmatic actor delivers knowingly to camera. “A lot of the shit I say is bullshit,” claims Hopper during a drug-fuelled wish fulfilment in which a bevy of beauties are brought to his commune-like home for a ‘sensitivity encounter’. There are numerous moments like this in which he displays a clarity of consciousness, seeing himself far more penetratingly than he sees what’s around him.

Schiller’s original idea was to seek out the real person behind the mythic persona and while this is an impossible task in any scenario, Hopper is far too canny about promoting his own personal brand to allow his guard down in any more than the briefest snatches. “Just act normal? Pretend you’re not here?” he asks with a glint in his eye. The result is a work that stretches the notion of documentary authenticity in an interesting way, but never really engages with the contradictions it raises. There’s all too much of a sense that the filmmakers and those around Hopper, are so glad to be hanging out in the aura of his pensive, stoned genius that they’ll lap up whatever he’s peddling.

“I like to put people on,” Hopper says as the enigma of how much he believes his own legend becomes a more present and compelling strain of the piece. At one stage, he compares himself at length to Orson Welles and brilliantly declares that if The Last Picture is only as good as The Magnificent Ambersons, he’ll be okay with that. It proves a prescient passage, foreshadowing his future directorial difficulties as he grapples with the editing process. It’s all engaging and enjoyable and off course Hopper is enormously charismatic, but it results in something that feels as though it frivolously fails to utilise of the unique landscape. The American Dreamer may fail as a definitive portrait of icon or movement but works as a Polaroid snapshot of a fascinating man in a very specific place and time. Or, given that they’re all dancing to Hopper’s tune anyway (he’s even credited as a writer), it’s performance art as cinematic selfie. One has to wonder if Shia LaBeouf has seen it.
Ben Nicholson | @BRNicholson