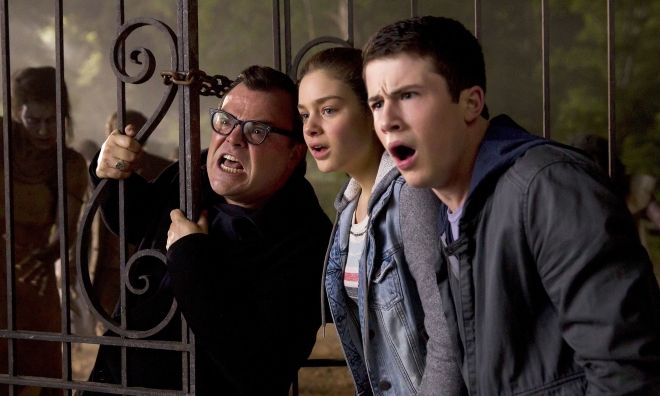 “R.L. Stine. Whatever happened to that guy?” Rob Letterman’s mile-a-minute, edge of your seat, raucously funny Goosebumps confirms that the 1990s (pre-He Who Shall Not Be Named) petrifier of children is alive and kicking. Donning dark horn-rimmed glasses, Jack Black is at his maniacal, magnetic best as the enigmatic writer in a wildly entertaining family flick that has enough spills and chills to delight young and old alike. Moving to a new town for a change of scenery after the death of his father, Zack (Dylan Minnette) and his mom (Amy Ryan) move in next door to less than welcoming neighbours. A tyrannical Black makes it clear that Zack is to keep clear of his daughter, Hannah (Odeya Rush), but the butterflies of teenage romance are sent fluttering across the fence.

Elsewhere, Zack begins life at his new school (where mom is now the vice principal), he is befriended by goofy, wannabe ladies man Champ (a hilarious Ryan Lee) and all talk is of the upcoming ‘dance’. It’s a familiar and reassuring outline to a story which takes an adventurous, terrifying turn when a book kept under lock and key at the Stine residence is mistakenly opened, freeing the Abominable Snowman from captivity. Chaos ensues, chiefly orchestrated by Stine’s alter-ego, Slappy (also voiced by Black), a megalomaniac ventriloquist dummy “with a Napoleonic complex” – although call him ‘dummy’ at your peril. Opening up and burning all other books to free his fellow ghouls, Slappy brings about a reign of terror to exact revenge on their creator. Is it all a bit ridiculous? Absolutely. But it’s an enjoyable thrill ride (which will undoubtedly be given the full 3D kitchen sink treatment). The performances are strong across the board, the actors supported by a script from Darren Lemke that contains several superb one-liners: an aggrieved Stine referred to as a poor man’s “Steve King” is a highlight.

Ryan is as watchable as ever and Jillian Bell provides several laughs as her quietly desperate single sister. Both with superb comic timing, it is refreshing that Zack and Champ aren’t afraid to express as much terror as any of their female counterparts and the latter’s piercing scream would truly be the envy of any girl. Odeya holds her own as the ethereal Hannah but isn’t quite as memorable. A dramatic siege scenario sees Stine, Zack, Hannah and Champ battling a werewolf, a giant praying mantis, zombies and a troupe of pick-axe wielding garden gnomes – Letterman unable to resist a Gulliver’s Travels-inspired reference here, a former feature which also starred Black. “One story to capture them all” must be written to prevent a dire end and the action hurtles towards its climax. Aspiring to the likes of Jumanji and The Goonies, Goosebumps is a welcome addition to the spooky action-adventure subgenre.