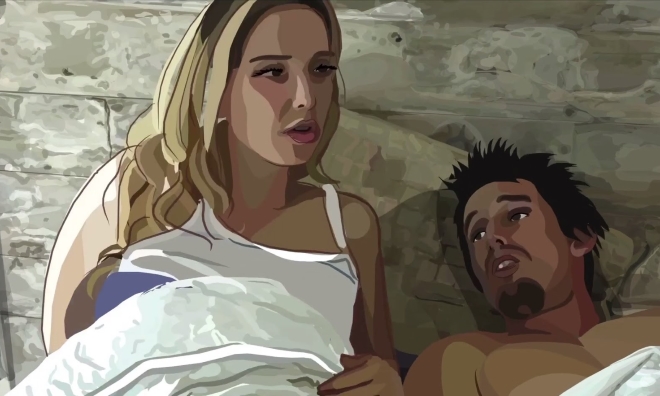 Richard Linklater may have received the best notices of his career for Boyhood (and rightly so) but it’s easy to forget previous to that film, he’d played around with the elasticity of storytelling in film, to equally stunning effect. Perhaps given the ostensibly bookish subject matter, Waking Life has seldom been acknowledged as a legitimate innovator of the medium. Subsequently deployed on a larger, more polished scale (but no less effective) in the director’s adaptation of Philip K. Dick’s A Scanner Darkly, the film’s use of rotoscoping is nothing short of wondrous.

Long-time fans of the film are in for an absolute treat with this Blu-ray edition from Arrow Video. The floaty, impressionistic animation has never looked so striking and vibrant. It’s like seeing a graphic novel come to vivid, swirling life in front of your very eyes. Witnessing Waking Life in all its high-def glory, it’s also apparent that the film represents a particularly fertile collaboration between Linklater and animation director Bob Sabiston, who receives his due via the wealth of supplementary material on the disc. Seeing chunks of DV footage is really testament to the skills and achievement of Sabiston and his team of illustrators. The film itself utilises Dazed and Confused‘s Wiley Wiggins as a loose guide through a series of Slacker-like vignettes, where a diverse assortment of characters offer their interpretations on reality.

Jessie and Celine, the characters from Linklater’s Before trilogy, crop up briefly to share their musings (predating Sunset by three years, you can probably thank this film for encouraging the director to continue their live-action relationship) and as Wiggins ventures deeper into his findings, he grows to realise (in a very Dick-esque manner) that he may be in the thralls of a perpetual dream state. Right from the outset there’s the impression that Linklater is using the film to help satisfy and inform his own inquisitiveness around human existence. Just like the audience are feeling their way around the various theories and beliefs posited, so too is the director, using his own characteristically laid back, yet intuitive, style. Even more impressively, the philosophical segments of the film are far from heavy-handed.

What could have been a stuffy and impenetrable 90 minutes of academia is entirely accessible, due to Linklater’s free-flowing treatment of the material. This is also evident in the playful and imaginative animation, which often borders on the surreal (a chatty professor almost bulges and distorts beyond all recognition in a flurry of colours as his grows increasingly energetic during his discourse). Waking Life is a film which both welcomes and encourages repeat viewing: there’s always something new to discover and take away from the uniqueness and originality on display.