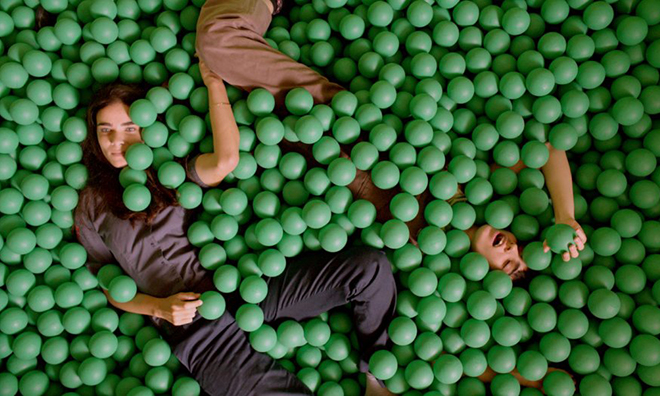 In the opening shot of Next to Her, impatient teenagers rattle the bars of a metal gate as they wait for Chelli (Liron Ben-Shlush) – the school security guard – to let them out. But it turns out that Chelli is far more trapped than the students behind the gates, because she is the only carer for her 24-year-old, severely mentally disabled sister Gabby (Dana Ivgy). The sisters share a dingy little apartment on the outskirts of a nondescript Israeli city, with Chelli devoting all her free time to making sure that Gabby is adequately fed, bathed and out of harm’s way. Despite her efforts, she is harassed by a local social worker and interrogated by neighbours, who ask why she lets Gabby drool down her sweater.

But this is no one-way story of crushing dependency. Indeed, if there is a single theme that unites Next to Her, it is that of the many dependencies that run through our communities, disability or no disability. While Chelli is responsible for Gabby on a physical level, on an emotional one she is actually the needier sibling. This is evident in her unhappiness when she is forced by her mother (Carmit Mesilati Kaplan) to send Gabby to a specialised day camp, despite the weight it promises to take off her shoulders. When she finds out that Gabby is enjoying herself and even making friends, and notices her repeating her instructor’s name at home, Chelli is enraged and takes out her jealousy through various petty acts of meanness towards her sister – clearly not what one would call a healthy relationship. The situation is only sustainable thanks to the money their mother gives them – a financial dependency she describes as a “major burden”. Such dependency also aptly characterises the situation of Zohar (Yaakov Zada Daniel), a 34-year old substitute teacher Chelli begins dating who still lives with his mother.

Director Asaf Korman, writer Liron Ben-Shlush and cinematographer Amit Yasur have come together to create what is a remarkably assured debut feature. The script is psychologically convincing and full of fascinating little details, although the final revelations do admittedly feel slightly heavy-handed. Visually, the most distinct elements of Next to Her‘s style are the sickly yellow hue and murky claustrophobia of the apartment that wordlessly convey the sisters’ unhealthy symbiosis, though the mood lightens up somewhat when Zohar enters the picture bringing some much needed change. The directing and editing are, like the acting, unfussy and naturalistic, although Korman also inserts some interesting shots – in which we see Gabby in a corner, in the background, in the dark, reflected a mirror – which speak to the way in which the disabled are marginalised in everyday experience. As for the film’s many dependencies, none end up being broken – despite promising moments of disruption – and we are left with the sense that things must go on as they always have.