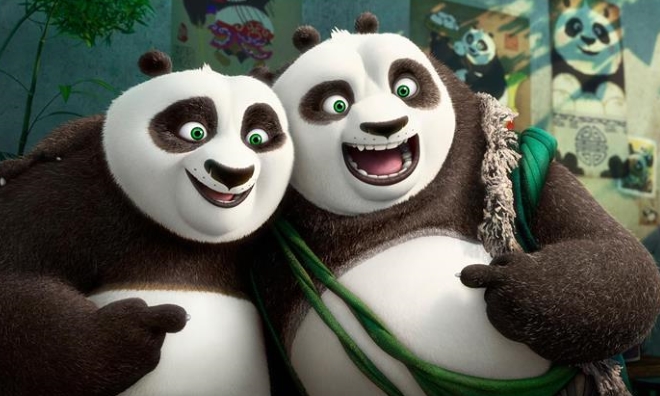 Kung Fu Panda 3, the last part in DreamWorks Animation’s trilogy (unless another is announced once box office receipts are tallied), puts an end to unlikely hero Po’s adventures in the best possible way, delivering laughs aplenty and the most vibrant animation this year. Po (Jack Black), now a Dragon Warrior, has settled into life well, battling evil and taking lessons from Master Shifu (Dustin Hoffman). But when his long-lost father Li Shan (Bryan Cranston) arrives unexpectedly, Po is sent on a quest to master the ancient art of Ch’i and become at one with himself. All the while an ancient evil from the spirit realm, Kai (JK Simmons), is garnering strength, his intention to destroy all kung fu masters, collecting their strength to bolster his own.

It’s up to Po, with the help of friends old and new, to put a stop to Kai before the whole of China falls under his leadership. The adventure narrative maintains a quick and delightful pace throughout. The humour is as on point, if not more so, than the previous two entries, with much laughter coming from Po’s awkward and bumbling nature as he finds his own way around problems, almost always going against the grain but reaching the same satisfying conclusion. However, it’s the substantial subtext that courses through the film that’s Kung Fu Panda 3‘s biggest surprise. It’s always been fascinating to watch Po develop as a character, and it’s no different here. In fact, more attention is paid to Po’s arc than before, with the arrival of his father shifting something inside him that feeds fire into his belly and drives him to make the discoveries needed to defeat Kai. It also creates an imbalance with his foster father Mr. Ping (James Hong) that’s played for some brilliant laughs, the lesson emerging that there can be more than one father figure in anyone’s life – the more the better.

It’s incredibly skilful the way these themes are weaved into the very core of the narrative, ensuring they never bog the film down. Jennifer Yuh Nelson returns after directing Kung Fu Panda 2, this time with newcomer Alessandro Carloni in tow, and the duo more than deliver. The stakes are upped and character count doubled, but this doesn’t mean attention to detail is spared. The visuals are sublime with different animation styles used to tell different stories. For example, the spirit realm boasts a dreamy feel, while a backstory sequence springs from a calligraphy scroll. It really is a treat to watch, the care and attention are at their highest level and the wistful, emotionally beguiling visuals as integral to the film as the tip top voice work and articulate story.