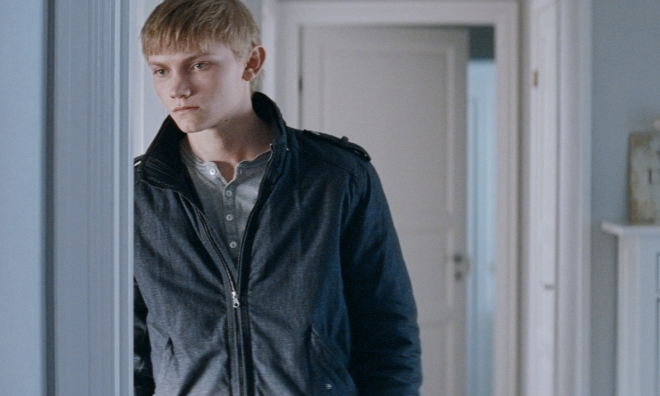 ★★★★☆
In writer-director Magnus von Horn’s The Here After the past encroaches on the present, poisoning what possibility there may be for one young man’s future. As teenager John (Ulrik Munther) is driven away from a detention facility by his father (Mats Blomgren), Lukasz Zal’s camera – hued an electric blue and frequently given to long takes and painfully static contemplation – sits in the back seat. As well as the tree-lined road extending out into the Swedish wilderness, a small portion of the screen reflects the rearview mirror and what lies behind father and son, thereby underlining that what has gone before is just as important as what lies ahead.

A large part of the success of The Here After comes from its painstakingly slow disclosure of information. Our suspicion is piqued from the early stages but John displays such vacant, insipid shyness, both physically and vocally, that it seems impossible he could have committed any heinous crime. However, his father’s evidently forced positivity, a neighbour’s gaze that falls and rests on John for a little longer than is comfortable, and his younger brother (Alexander Nordgren) making a joke about dropping the soap all fuel a fire that burns with glacial bitterness behind his placid, emotionless eyes. When a woman, initially blurred, comes into focus and attacks John in the aisle of a supermarket it seems that a tipping point may have been reached but still the full backstory is withheld.

To reveal much more would do a disservice to the simmering tension which unfurls before rising to a crushing crescendo. In aligning our point of view with John, von Horn pits the teenager against a lynch mob similar to that faced by Mads Mikkelsen in Danish director Thomas Vinterberg’s The Hunt. Although not seeking to vindicate his actions, The Here After presents him as a victim of vindictive bullying by villagers baying for his blood, posing questions of rehabilitation, second chances, compassion and atonement. Set in a small rural town of prying eyes where word swiftly gets around there is no escape for a family blighted by its past. His father’s inability to communicate or deal with a situation that is beyond his means leaves conflict unresolved; much is left unspoken, hanging in mid-air between separate rooms.

Von Horn maintains a menacing air of unease throughout without ever loosening a vice-like grip. With no noticeable score to speak of, the diegetic sounds of every day life – tractors, lawnmowers and chirping birds – somehow further the foreboding and give the impression that something truly awful lurks around the corner. Munther and Blomgren carry the film on weary, downtrodden but resolute shoulders with two very fine performances. An assured and captivating debut feature, von Horn weaves a moral tale of guilt, redemption and revenge with a disquieting restraint that catapults his film towards the territory of Malick or Haneke.