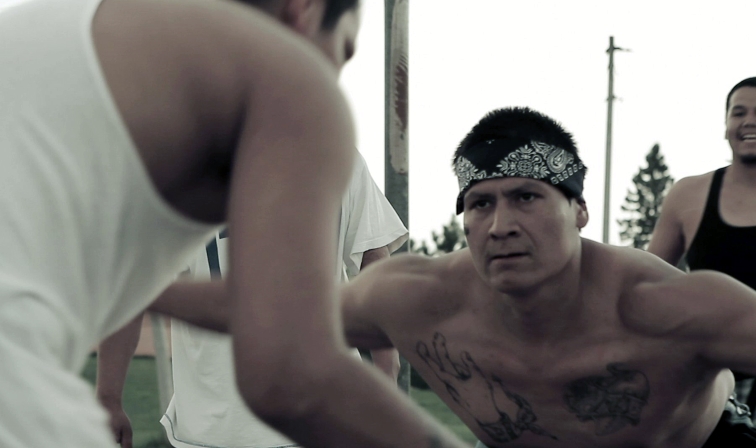 “About 1/10 every ten years makes it out of here,” says a father exasperated by his drug-peddling son. The outlook for young members of the White Earth Indian Reservation is crushingly bleak. From the outset of The Seventh Fire, the first feature length documentary from Jack Pettibone Riccobono, it’s bracingly candid in both tone and image. The New York-based filmmaker roams across wasteland, into and out of run-down homes and sits in cars as the inhabitants of Pine Point lay bare a debilitating cycle of criminality, unemployment, substance abuse and the pursuant loss of their aboriginal culture.

Riccobono neither condemns nor sympathises, maintaining a commendable neutrality, as his subjects frank testimony paves the way to jail cells. Like the hulking freight trains that rattle through town, Riccobono’s doc takes a while to get up to speed. Names are not given and explanations are not made until we are acclimatised to the deplorable surroundings: a man prepares drugs at his kitchen table in plain sight of his children with an air of normality akin to spreading butter on toast. It is a pity that the film’s title – which refers to an Anishinaabe prophecy – is also left unspoken. Its mythological importance for the past and future would reinforce just how desperately this lost people need direction from their forefathers. Robert Brown, continually in and out of prison, is the aforementioned kingpin and family man.

From behind dark glasses, and with a wry smile, he suggests, “I haven’t been law-abiding lately.” Evidently a rather gross understatement, this playful comment comes from a figure with whom we empathise in spite of his drastic failings. With a young daughter he adores – and a son on the way – his desire to clean up his act grows, even as a 57-month prison term keeps him away from his loved ones. Robert is not alone in this learned behaviour: at one moment, prior to his incarceration, a woman hands him a baby to hold as she does a line of cocaine before reclaiming the child; teenage drug runner Kevin, who gets high with his friends, impregnates his girlfriend and plans to continue as a middleman for want of better opportunities. All stated with such a deluded openness, viewers will hardly be able to believe their ears as we witness a truly grim, seemingly uncontrollable spiral of despair.

Although given remarkably intimate access to the inner workings of a community that subsists on the distribution of meth and other narcotics, Riccobono never poses questions directly. His up close and personal camerawork (conducted with the film’s co-writer Shane Slattery-Quintanilla) doesn’t appear to phase those onscreen in the slightest. His unflinching inquisitiveness rarely pulls away and images of the sky, water and forests offer welcome momentary escape as well as acting as a reminder of the traditional importance of nature to a community crippled by contemporary vice. Armchairs and cars are set alight for fun in Pine Point but although utter hopelessness reigns for much of The Seventh Fire, the faintest flicker of hope from an ancient Anishinaabe powwow fights for survival against a vicious whirlwind of depravity.