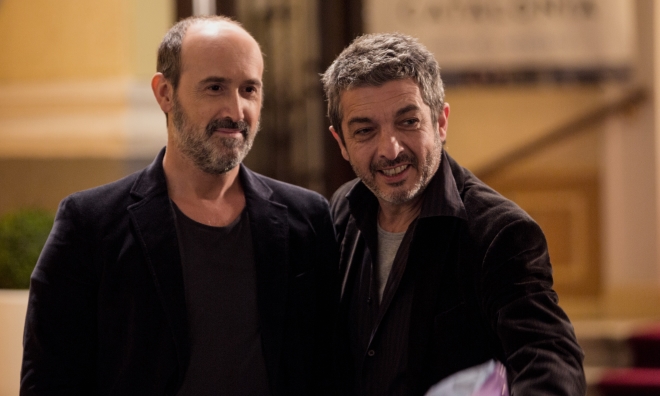 When a theatre actor bumps into old acquaintances at a restaurant and says “my run’s almost over” it usually means he is to move onto another play, another role. For Julián (Ricardo Darin), who has made the decision to discontinue his cancer treatment, the expression has a tongue-in-cheek, tragicomic finality. Truman, from Barcelona native Cesc Gay, who both directed and co-wrote a finely pitched script with fellow Catalonian Tomàs Aragay, avoids the cloying sentimentality of more mainstream efforts, steering away from the expected scenes of suffering and despair by relegating disease to a peripheral cameo. Urging us to grin in the face of impending death, Truman handles grim material with grace, humour and the honesty of two old friends who tell it like it is.

With a resolutely roguish smile and determination to enjoy himself before shuffling off this mortal coil, Julián receives a surprise four-day visit from lifelong pal Tomàs (Javier Càmara). Flying in from a snowy Canada – plenty of jibes about bears and living at the North Pole will be made – Tomàs is unaware of the choice that has been taken. Initial attempts to counsel a change of heart fall on deaf ears, Juliàn more concerned that his dog, Truman, will be well cared for when his papa’s no longer around. A candid, morbid and slightly ridiculous humour runs throughout, not least in an early scene where a vet is questioned about how dogs experience grief and loss. Finding his pup a new home is an unusual through line and vessel by which Juliàn attempts to accept and find peace in the inevitable. Losing those he will leave behind is harder to come to terms with than his own passing, a sleepover for Truman at a prospective owner’s house causing him more visible anguish than unspoken physical discomforts.

Darin, most well known by international audiences for his performance in Juan José Campanella’s superb The Secret in Their Eyes, is charming here, playing Juliàn with a relaxed shrug of the shoulders and quiet resignation, he is the most at ease of all involved: “Each person dies the best they can.” Just as Gay has a little under two hours to tell his story, these old chums have a finite amount of time together and the impact of losing Juliàn is amplified by the steely reticence of Càmara’s performance. Tomàs is pragmatic and practical, not wishing to fight with his mate before their final goodbye, he does not put up the same kind of resistance as embittered sister Paula (Dolores Fonzi).

A lustful last-minute affair jars considerably as we enter the final stages but it is the only plot point which feels out of place in a heartfelt piece that refreshingly eschews any and all run-of-the-mill outbursts of emotion. A deep sigh from the titular canine sums up the overriding mood extremely well. Truman walks the path to the end of the road with a frankness, practicality and restraint that is deeply affecting. The characters may not shed too many tears but dry eyes will be in short supply for cinema-goers at the end of this tale of two men and their dog.